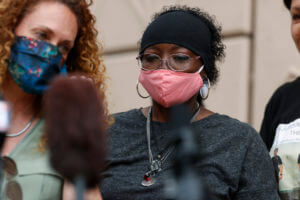 FILE – In this July 3, 2020, file photo, Sheneen McClain, right, steps back as family attorney Mari Newman steps up to talk during a news conference at the memorial site across the street from where McClain’s 23-year-old son, Elijah, was stopped by police officers, in Aurora, Colo. (AP Photo/David Zalubowski, File)

DENVER (AP) — The parents of Elijah McClain, a 23-year-old Black man who died after officers in suburban Denver stopped him on the street last year and put him in a chokehold, sued police and medical officials Tuesday.

With the federal civil rights lawsuit, the McClain family said they were seeking both accountability for the loss of a “beautiful soul” and to send a message that “racism and brutality have no place in American law enforcement.”

“We have filed this civil rights lawsuit to demand justice for Elijah McClain, to hold accountable the Aurora officials, police officers, and paramedics responsible for his murder, and to force the City of Aurora to change its longstanding pattern of brutal and racist policing,” the family said in a statement released by their attorney.

McClain was stopped by three white officers on Aug. 24, 2019, while they responded to a call about a suspicious person wearing a ski mask and waving his arms. Police put him in a chokehold, and paramedics gave him 500 milligrams of ketamine to calm him down. 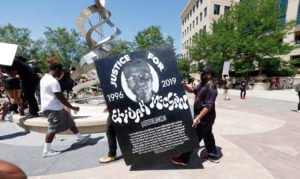 FILE – In this June 27, 2020, file photo, demonstrators carry a giant placard during a rally and march over the death of Elijah McClain outside the police department in Aurora, Colo.  (AP Photo/David Zalubowski, File)

The lawsuit claims one officer jammed his knee into McClain’s arm “with the sole purpose of inflicting pain by forcefully separating Elijah’s bicep and triceps muscles.”

It also says two of the officers reported that all three of them simultaneously placed their body weight on McClain after a chokehold. One officer estimated that the collective weight on McClain, who weighed 140 pounds, to be over 700 pounds.

Aurora police and the city’s fire department did not immediately return a call and an email seeking comment on the lawsuit.