The body of Illiana “Lily” Peters was found Monday morning near a walking trail in Chippewa Falls. Police said her death was a homicide. 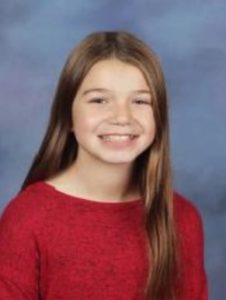 Chippewa Falls Police Chief Matthew Kelm during a brief news conference declined to provide the age or sex of the suspect, whether the suspect was related to the girl or where the arrest occurred. He said there was no longer any danger to the public.

“While nothing will bring Lily Peters back or change what happened, we are very grateful to be able to deliver this news for the family and for the community,” Kelm said.

Officers executed a search warrant at an address in the block where Lily had gone to visit her aunt on Sunday, when she went missing. Kelm said. He did not disclose whether the search yielded any evidence of value.

Kelm thanked the community for more than 200 tips that were provided to law enforcement and were “critical” to the investigation.

Chippewa County sheriff’s deputies and Chippewa Falls police used search dogs and a drone in searching for Lily. Police say a bike believed to be Lily’s was found near a walking trail.

Lily was a fourth-grader at Parkview Elementary School, where an outdoor memorial of flowers, stuffed animals and balloons continued to grow, KSTP-TV reported.

The school district superintendent, Jeff Holmes, sent a note to parents recommending that children who usually walk to or from school, instead be dropped off and picked up by family members or trusted friends until further notice.

Chippewa Falls, with a population of about 13,000, is approximately 100 miles (161 kilometers) east of the Twin Cities.