SEBASTIAN, Fla. (WPTV) — A Florida woman is under arrest after police said she stuffed her dead mother’s body into a freezer because she wanted to continue receiving her mom’s disability benefits.

Officers found the body of Marie Hoskins, 93, on April 28 inside a chest freezer in her garage at her home in the 100 block of Paddock Street. 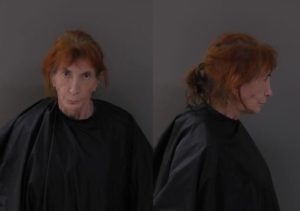 Sebastian police said Friday that Hoskins’ daughter, Michele Hoskins, 64, was arrested Thursday for tampering with or destroying evidence and failing to report her mother’s death.

According to detectives, Hoskins admitted to finding her mother deceased in her bedroom in April, then buying a deep freezer to hide her mother’s body because she was concerned she wouldn’t be able to receive her mom’s disability benefits anymore.

The investigation revealed that Marie Hoskins died from natural causes and her body wasn’t put inside the freezer for two weeks.

According to the Sebastian Police Department, officers went to the family’s home on April 28 after a concerned neighbor called 911 and said she hadn’t seen Marie Hoskins in a while.

Officers were unable to reach anyone inside the home, so out of concern for Hoskins’ well-being, they got a key from a family member and entered the house.

Inside, police said they found Michele Hoskins, who told officers she hadn’t seen her mother in some time. A search of the property eventually uncovered Marie Hoskins’ body inside a freezer in the garage.

“It’s scary thinking that somebody could do that,” said neighbor Katrina Houde. “I have kids that play in my front yard that were, like, just feet away from a garage that she was just holding her mom in for that long. So it is sad that somebody would be willing to do that.”

Michele Hoskins was booked into the Indian River County Jail around 6:30 p.m. Thursday. She’s being held on $10,000 bond.

This story was originally published July 8 by WPTV in West Palm Beach, an E.W. Scripps Company.