NEW YORK (AP) — In the end, it wasn’t a last-minute smoking gun but a prosecutor insisting that evidence shows Donald Trump was aware of a scheme that his Trump Organization’s executives hatched to avoid paying personal income taxes on millions of dollars worth of company-paid perks.

After telling jurors on Thursday that Trump “knew exactly what was going on” with the scheme, Assistant Manhattan District Attorney Joshua Steinglass followed up by citing trial evidence and testimony that he said made clear “Mr. Trump is explicitly sanctioning tax fraud.” 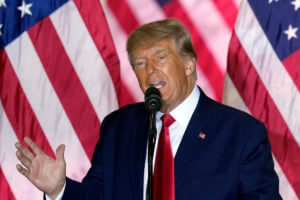 FILE – Former President Donald Trump announces a third run for president as he speaks at Mar-a-Lago in Palm Beach, Fla., Nov. 15, 2022. A prosecutor on Thursday, Dec. 1, 2022, said Trump “knew exactly what was going on” with top Trump Organization executives who schemed for years to dodge taxes on company-paid perks. (AP Photo/Rebecca Blackwell, File)

Steinglass, speaking on the last day before deliberations at the Trump Organization’s criminal tax fraud, showed jurors a lease Trump signed for one executive’s Manhattan apartment and a memo the former president initialed authorizing a pay cut for another executive who got perks.

He also cited Weisselberg’s claim, during his three days of testimony, that he told Trump he would pay him back after Trump agreed to cover his grandchildren’s hefty private school tuition cost. Weisselberg then adjusted his payroll records to cut his pre-tax salary by the cost of the tuition.

“I mention this all to show that this whole narrative that Mr. Trump was blissfully ignorant is just not real,” Steinglass said.

Trump himself is not on trial, as Steinglass reminded jurors, but Judge Juan Manuel Merchan gave him the green light to talk about Trump’s possible awareness of the scheme after the company’s lawyers, in their summations, claimed that Trump knew nothing about it.

Trump has denied knowing that Weisselberg and other executives were dodging taxes, writing on his Truth Social platform this week: “There was no gain for ‘Trump,’ and we had no knowledge of it.”

After Steinglass finished Friday, Trump Organization lawyer Michael van der Veen asked Merchan to declare a mistrial, arguing that the prosecutor had irreparably harmed the defense by effectively portraying Trump as a co-conspirator in the tax fraud scheme.

“I don’t believe it’s necessary to declare a mistrial. That’s not really even a thought,” Merchan said, agreeing to instead caution jurors about Steinglass’ remarks.

But Steinglass’ sudden focus on Trump’s knowledge of the scheme, right as the Trump company’s trial was ambling to a conclusion, begged the question: Why wasn’t he charged, too?

The Manhattan district attorney’s office declined comment, citing the ongoing trial. District Attorney Alvin Bragg, who inherited the case when he took office in January, has said that an investigation of Trump is “active and ongoing,” and that no decision has been made on whether to charge him.

The Trump Organization, the entity through which Trump manages his golf courses, hotels and other ventures, is charged with helping some top executives avoid paying income taxes on non-monetary compensation. The company’s case is the only trial to arise from the Manhattan district attorney’s office’s three-year investigation of Trump and his business practices.

Prosecutors argue that the company is liable because Weisselberg and an underling he worked with on the scheme, controller Jeffrey McConney, were “high managerial” agents entrusted to act on behalf of the company and its various entities. If convicted, the company could be fined more than $1 million.

The defense has alleged that Weisselberg came up with the tax dodge scheme on his own, without Trump or the Trump family knowing, and that the company didn’t benefit from his actions.

“We are here today for one reason and one reason only: the greed of Allen Weisselberg,” Trump Organization lawyer Susan Necheles said Thursday.

Weisselberg testified that Trump didn’t know, but that the Trump Organization did derive some benefit because it didn’t have to pay him as much in actual salary. Van der Veen peppered his summation Thursday with the defense’s mantra: “Weisselberg did it for Weisselberg.”

“Their entire theory of the case is a fraud,” Steinglass said Friday morning before the jury entered the courtroom, as company lawyers were seeking to temper his rhetoric.

One company-paid Manhattan apartment even went to Weisselberg’s son, Barry, ostensibly so he could respond quickly to emergencies at the Central Park ice rink the company managed.

At the outset of the trial, Merchan cautioned the defense and prosecution to avoid talking about Trump so as to not give jurors the impression that longtime real estate honcho was, or should have been, sitting at the defense table.

But the judge noted Friday that the tenor of the trial changed after defense lawyers and prosecutors frequently mentioned Trump during arguments and testimony, even though he did not testify and did not attend the trial.

Steinglass, wrapping his summation, told jurors that Trump was “the elephant that’s not in the room.”