LOS ANGELES (AP) — Kathie Durst vanished without a trace nearly 40 years ago in New York. She’s been declared dead, but her body’s never been found and no one has been charged with a crime related to her disappearance.

A prosecutor argued in a Los Angeles murder trial Wednesday that her husband, Robert Durst, the estranged heir to a New York real estate fortune, killed her and her death became the basis for his “playbook” on getting away with two other killings.

“He tried to figure out, ‘How do I get away with murder?’” Deputy District Attorney Habib Balian said. “What’s my go-to move?”

Durst, 78, is charged with murder in the point-blank shooting of his best friend, Susan Berman, at her Los Angeles home in December 2000. Prosecutors said Durst killed her as she planned to speak to authorities about how she provided a phony alibi when his wife went missing in New York in 1982.

Balian used the imaginary playbook to show how Durst covered up Kathie Durst’s death and how this later evolved into knocking off witnesses, such as Berman and a neighbor in Texas.

The first step was to get rid of the body. Despite a lack of forensic evidence, Balian argued Durst killed his wife in their lakeside home in Westchester County on the night she was last seen and chopped it up and buried it in the Pine Barrens of New Jersey.

Durst has always maintained he dropped his wife at a train station so she could head to the city to attend medical school the following day. He has admitted he lied when he said he spoke with her that night by phone after she reached their Manhattan apartment.

He then made it appear she was still alive.

He used Berman, the daughter of a mobster and fiercely loyal to him, to impersonate his wife the next day and phone the medical school dean to say she was sick and couldn’t report to her pediatric rotation.

“They embarked on a campaign to obscure the truth, to lead the investigation in a completely wrong direction,” Balian said. 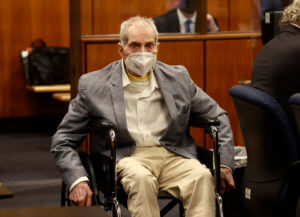 Robert Durst in his wheelchair spins in place as he looks at people in the courtroom as he appears in a courtroom in Inglewood, Calif. on Wednesday, Sept. 8, 2021, with his attorneys for closing arguments presented by the prosecution in the murder trial of the New York real estate scion who is charged with the longtime friend Susan Berman’s killing in Benedict Canyon just before Christmas Eve 2000. (Al Seib/Los Angeles Times via AP, Pool)

The third move was to make it appear Kathie Durst, who was close to graduation and seeking a divorce, just walked away from her life. Durst told a New York Post reporter he thought his wife had a breakdown and ran off, though he implied she may have had a run-in with criminals because of her cocaine use.

While he offered a reward for information leading to her and said he was hopeful she would return, his actions said otherwise, Balian said. Days after her disappearance, he tossed out her textbooks and clothing.

Durst, who is ailing and seated in a wheelchair throughout the trial, testified that he didn’t kill his wife and didn’t kill Berman. However, he also admitted he had lied on the witness stand and said if he had killed his wife and Berman, he would lie about it.

The prosecution’s case may be the closest thing to a criminal trial in Kathie Durst’s presumed death. Balian spent much of the day weaving her alleged death with Berman’s killing and Robert Durst’s fatal shooting of Morris Black in Galveston, Texas.

Although it took nearly four months to present evidence of three murders to prove one, Balian said it was a simple case that arose from a fairytale marriage gone bad.

Durst, a multimillionaire, married Kathleen McCormack, a vivacious 19-year-old who was nine years younger and came from a working-class family. He described marrying beneath his rank to a small town girl with “zilch” for an education.

As she began to blossom and pursue a career as a doctor, Durst’s husband became increasingly controlling and abusive.

“She met this man she thought was her Prince Charming,” Balian said. “It turned out to be a very treacherous path.”

He said Durst has been running from responsibility ever since his wife vanished, covering his tracks with a “fantastical tale” to mislead or deflect from his guilt and telling lies so numerous he couldn’t keep them all straight.

“This was an Olympic year,” Balian said. “If there was an event for running from the truth, he’d be on the top of the podium.”

Balian said there was direct evidence of Durst’s guilt and corroborating accounts from dozens of prosecution witnesses that was overwhelming in the face of Durst’s unreliable testimony.

Berman told several friends over the years that she had helped provide an alibi for Durst. She told one friend that if anything happened to her, Durst did it.

The defense has called her a “fabulist” who concocted or embellished stories. 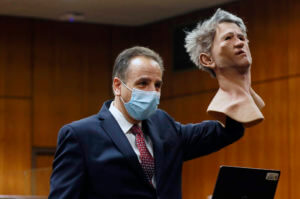 Balian said the final lesson in Durst’s playbook was to get rid of witnesses. He said Berman’s loyalty was repaid with “a bullet in the back of her head. By her best friend.”

He said Durst similarly took out Morris Black in 2001 after the elderly Galveston, Texas, neighbor discovered his true identity while he was living under an alias while hiding out from New York authorities reinvestigating his wife’s death.

Durst was acquitted of murder at trial in 2003 after testifying Black pulled a gun on him and was killed in the struggle for the weapon.

But he employed the same strategy he had with Berman: “It was her or me. I had no choice,” Balian said, repeating a line Durst allegedly told one of the key witnesses.

“Don’t let him get away with it,” he said. “He’s gotten away with murder for a long time. It’s time for that to end.”