MINNEAPOLIS (AP) — Prosecutors charged three more police officers Wednesday in the death of George Floyd and filed a new, tougher charge against the officer at the center of the case, delivering a victory to protesters who have filled the streets from coast to coast to fight police brutality and racial injustice.

The most serious charge was filed against Derek Chauvin, who was caught on video pressing his knee to Floyd’s neck and now must defend himself against an accusation of second-degree murder. The three other officers at the scene were charged for the first time with aiding and abetting second-degree murder and second-degree manslaughter.

All four were fired last week. If convicted, they could be sentenced to up to four decades in prison.

The other officers — Thomas Lane, J. Kueng and Tou Thao — face the same maximum penalties for aiding and abetting. All three men were in custody by Wednesday evening. Chauvin was arrested last week and is still being held.

The multiple charges against each officer would offer a jury more options to find them guilty.

The charges were sought by Minnesota Attorney General Keith Ellison, who called the protests unleashed by the death “dramatic and necessary” and said Floyd “should be here and he is not.”

“His life had value, and we will seek justice,” said Ellison, who cautioned that winning convictions would be hard and said that public pressure had no bearing on his decisions.

Hundreds of protesters were in New York City’s Washington Square Park when the charges were announced.

“It’s not enough,” protester Jonathan Roldan said, insisting all four officers should have been charged from the start. “Right now, we’re still marching because it’s not enough that they got arrested. There needs to be systematic change.”

Ben Crump, an attorney for Floyd’s family, called it “a bittersweet moment” and “a significant step forward on the road to justice.” Crump said Elison had told the family he would continue his investigation into Floyd’s death and upgrade the charge to first-degree murder if warranted.

The move by prosecutors punctuated an unprecedented week in modern American history, in which largely peaceful protests took place in communities of all sizes but were rocked by bouts of violence, including deadly attacks on officers, rampant thefts and arson in some places. 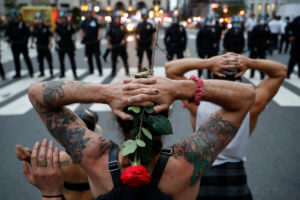 Protesters kneel in front of New York City Police Department officers before being arrested for violating curfew beside the iconic Plaza Hotel on 59th Street, Wednesday, June 3, 2020, in New York. Protests continued following the death of George Floyd, who died after being restrained by Minneapolis police officers on May 25. (AP Photo/John Minchillo)

Nationwide, more than 9,000 have been arrested in connection with unrest. At least 12 deaths have been reported, though the circumstances in many cases are still being sorted out.

Minnesota has opened a civil rights investigation into whether the Minneapolis Police Department has a pattern of discrimination against minorities.

On Wednesday, the Hennepin County Medical Examiner’s Office released the full autopsy report on Floyd, which noted he had previously tested positive for COVID-19, but was apparently asymptomatic. The report was released with the family’s permission after summary findings Monday that said had a heart attack while being restrained by officers.

Minnesota Gov. Tim Walz, speaking after the new charges were announced, said the state and nation need to “seize the moment” and use the wrenching events of the past week to confront the effects of racism, including unequal educational and economic opportunities.

“I think this is probably our last shot, as a state and as a nation, to fix this systemic issue,” he said at a news conference.

President Donald Trump has pushed the nation’s governors to take a hard line against the violence. He again tweeted Wednesday: “LAW & ORDER!”

Within hours, thousands of peaceful protesters were in the streets again in the nation’s capital, singing “Amazing Grace” as they knelt under the watch of law enforcement officers in riot gear. “We are not going anywhere!” they chanted.

Protester Jade Jones, 30, said the demonstrations would continue despite the new charges.

“That’s the least they could do,” said Jones, who had been attending Washington protests for days. “It’s not going to wipe away 400 years of pain.”

“We are glad there are additional charges, but that doesn’t mean justice has been served,” she said.

More than 20,000 National Guard members have been called up in 29 states to deal with the violence.

In Greece, police fired tear gas after young people attacked them Wednesday outside the U.S. Embassy in Athens. Some 4,000 protesters had been peaceful until near the end of the demonstration, when some threw gasoline bombs and stones at police. No injuries or arrests were reported. Other protests were held Wednesday in London, Helsinki, Rotterdam and Bogota, among other cities.

The anger over Floyd’s death has spilled into an array of racial issues across the U.S. 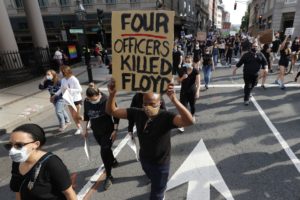 People march in protest against police brutality in Boston, Wednesday, June 3, 2020, following the death of George Floyd, who died after being restrained by Minneapolis police officers on Memorial Day. (AP Photo/Charles Krupa)

In Philadelphia, for example, a statue of former Mayor Frank Rizzo was removed by the city early Wednesday after repeatedly being targeted by vandals. Rizzo presided over a police force widely accused of racism and brutality in the 1970s.

In Virginia, Gov. Ralph Northam was expected to announce plans Thursday for the removal of an iconic statue of Confederate Gen. Robert E. Lee from Richmond’s prominent Monument Avenue, a senior administration official told The Associated Press. The statue in the former Confederate capital has been the target of vandalism during the protests.

Associated Press journalists across the U.S. contributed to this report. 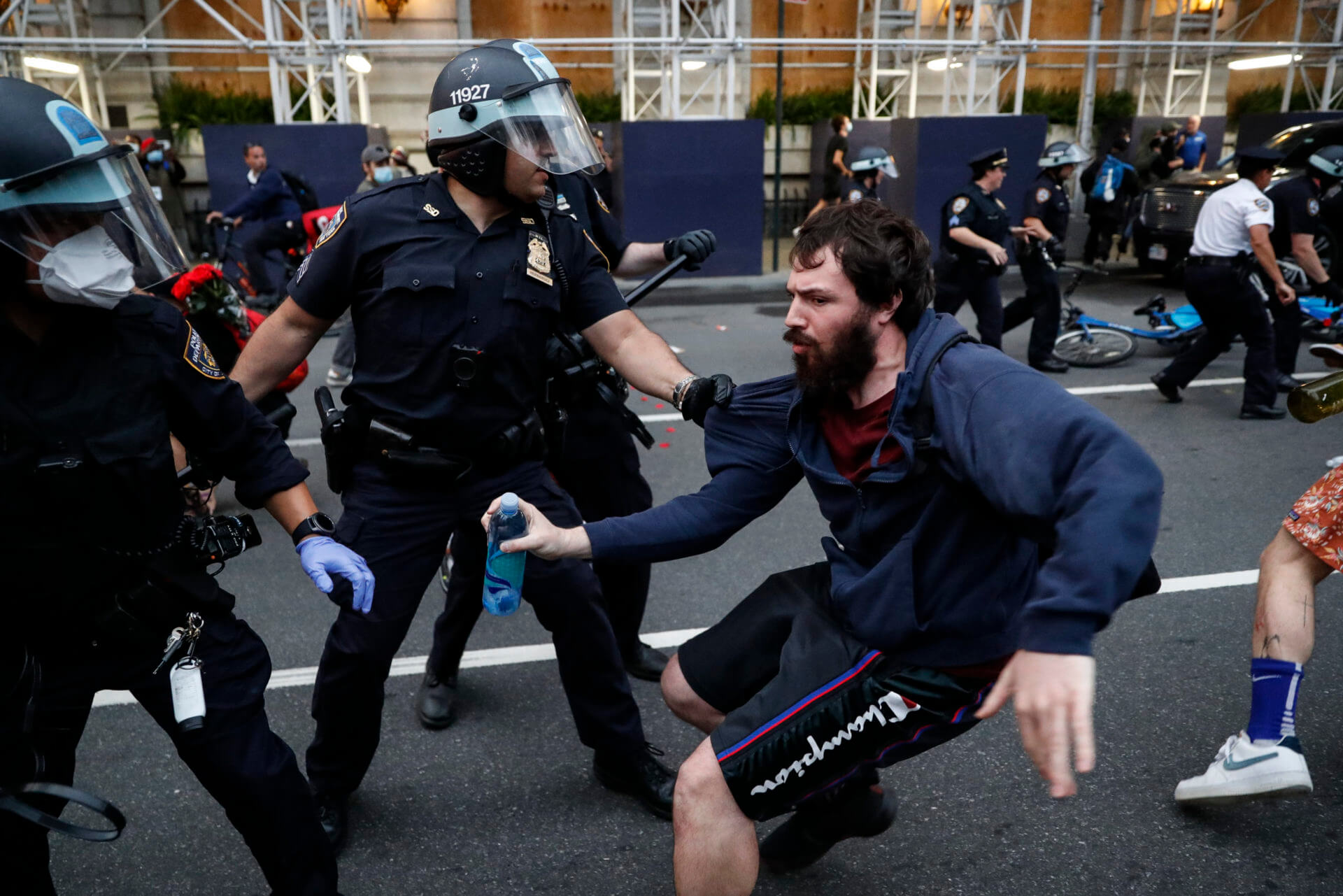 A protester is arrested for violating curfew near the Plaza Hotel on Wednesday, June 3, 2020, in the Manhattan borough of New York. Protests continued following the death of George Floyd, who died after being restrained by Minneapolis police officers on May 25. (AP Photo/John Minchillo)
MORE NEWS