SEOUL, South Korea (AP) — South Korean police are seeking criminal charges including involuntary manslaughter and negligence against 23 officials, about half of them law enforcement officers, for a lack of safety measures they said were responsible for a crowd surge that killed nearly 160 people.

Despite anticipating a weekend crowd of more than 100,000, Seoul police had assigned 137 officers to the capital’s nightlife district Itaewon on the day of the crush. Those officers were focused on monitoring narcotics use and violent crimes, which experts say left few resources for pedestrian safety. 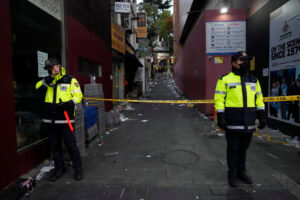 FILE- Police officers stand guard at the scene where dozens of people died and were injured during a crowd surge in Seoul, South Korea, on Oct. 30, 2022. South Korean police on Friday, Jan. 13, 2023, said they are seeking charges of involuntary manslaughter and negligence against 23 officials, for a lack of safety measures they said were responsible for a crowd surge that killed nearly 160 people in October. (AP Photo/Ahn Young-joon, File)

Son Je-han, who headed the National Police Agency’s special investigation into the incident, said Friday his team will now send the case to prosecutors. Those recommended for indictment include Park Hee-young, who is mayor of Seoul’s Yongsan district, and the district’s former police chief Lee Im-jae — two of the six who have been arrested.

Lee has also been accused of falsifying a police report to disguise his late arrival to the scene. Two other police officials have been arrested over suspicions they attempted to destroy computer files and other potential evidence tied to the accident.

The results of the 74-day police investigation announced by Son mostly confirmed what was already clear — that police and public officials in Yongsan failed to employ meaningful crowd control measures for the expected numbers of Halloween revelers and essentially ignored pedestrian calls placed to police hotlines that warned of a swelling crowd hours before the surge turned deadly on Oct. 28.

Officials also botched their response once people began getting toppled over and crushed in a narrow alley clogged with partygoers near Hamilton Hotel around 10 p.m., failing to establish effective control of the scene and allow rescue workers to reach the injured in time, Son said.

“(Their) inaccurate judgement of the situation, the slow distribution of information about the situation, poor cooperation between related institutions and delays in rescue operations were among the overlapping failures that caused the high number of casualties,” Son said at a news conference in Seoul.

Son said his team questioned nearly 540 people and collected 14,000 pieces of evidence from central and municipal government offices and transportation authorities. He said police investigators studied more than 180 video files recorded on security cameras or taken by journalists and pedestrians and jointly inspected the scene with forensic experts to analyze the density of the crowd.

Police said the crowd packing the corridor-like alley between the hotel and a dense row of storefronts grew into an unstoppable wave around 9 p.m., with people being unable to dictate their movement once they got swept in. At around 10:15 p.m., people began falling and toppling on one another like dominos, leading to the tragedy that resulted in 158 deaths and 196 injuries. 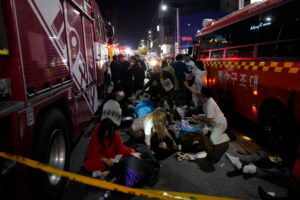 FILE – Injured people are helped near the scene of a crowd surge incident in Seoul, South Korea, on Oct. 30, 2022. South Korean police on Friday, Jan. 13, 2023, said they are seeking charges of involuntary manslaughter and negligence against 23 officials, for a lack of safety measures they said were responsible for a crowd surge that killed nearly 160 people in October. (AP Photo/Lee Jin-man, File)

Analysis of security camera footage and simulations by the National Forensic Service indicate the crowd density at the alley was around eight people per square meter (yard) at around 10:15 p.m. The density grew to eight to nine people occupying the same unit of space as of 10:20 p.m. and around nine to 11 people as of 10:25 p.m., police said.

Paramedics struggled to reach the scene because the area was so densely packed. Those who arrived were so overwhelmed by the large number of people lying motionless on the ground that they asked pedestrians to help them perform CPR. Most of the deaths were caused by suffocation or brain damage, police said.

It’s unclear whether the results of the police investigation would be enough to calm the public’s anger and demands for government accountability as the country continues to cope with its worst disaster in nearly a decade.

Opposition lawmakers and some relatives of the victims have demanded investigations into more high-profile figures, such as Interior and Safety Minister Lee Sang-min and National Police Agency Commissioner General Yoon Hee-keun, who have faced calls to resign.

However, Son said the special investigation team will close its probes on the Interior and Safety Ministry, the National Police Agency, and the Seoul Metropolitan Government, saying it was difficult to establish their direct responsibility.

Some experts have called the crush in Itaewon a “manmade disaster” that could have been prevented with fairly simple steps, such as employing more police and public workers to monitor bottleneck points, enforcing one-way walk lanes and blocking narrow pathways or temporarily closing Itaewon’s subway station to prevent large numbers of people moving in the same direction. 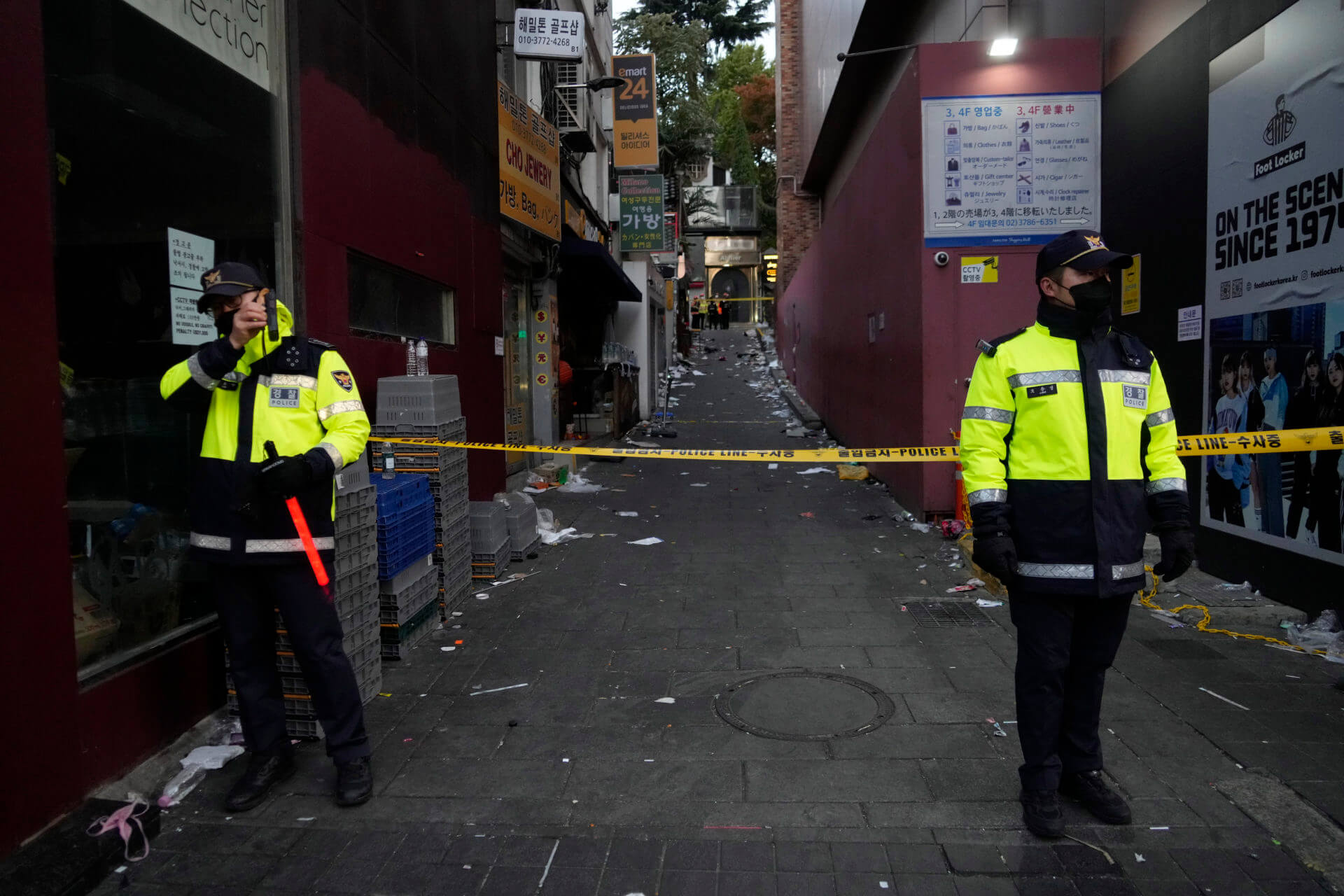 FILE- Police officers stand guard at the scene where dozens of people died and were injured during a crowd surge in Seoul, South Korea, on Oct. 30, 2022. South Korean police on Friday, Jan. 13, 2023, said they are seeking charges of involuntary manslaughter and negligence against 23 officials, for a lack of safety measures they said were responsible for a crowd surge that killed nearly 160 people in October. (AP Photo/Ahn Young-joon, File)
MORE NEWS