TAMPA, Fla. (WFTS) — The double-murder trial of a Riverview man accused of killing his girlfriend and 9-year-old daughter in 2018 began Monday.

Ronnie Oneal III, 32, is accused of killing Kenyatta Barron and Ron’Niveya Oneal. He’s also accused of trying to kill his son, who was eight years old at the time.

With a deep breath and a brief pause, the Hillsborough County Sheriff’s deputy who adopted Ronnie Oneal III’s son tearfully described to jurors how his relationship with the little boy began in March 30, 2018.

“The evening of the 30th, I went back with my wife and watched a movie,” he said.

That was after he spent the entire day with the little boy. He heard he was a big football fan and was able to get him some Bucs swag.

The boy’s Guardian Ad Litem, a person who was assigned to speak up for the little boy’s best interest, asked him if he knew someone who would be willing to foster him and help take him to his medical appointments.

“I told him my wife and I would be happy to take him,” he said. That was the moment he decided to foster the boy.

A year and a half later they made a choice.

“Did you and your wife adopt [him] as your own son?” the state asked.

The Corporal, who was a detective at the time of the double murders did show up to the scene but testified he had never met the little boy that night. He was only tasked with securing a search warrant and transporting an inmate uniform to a fellow detective.

State: “At that point, was your part in this investigation of this case over?”

In cross-examination, Oneal made just one statement. “Thank you sir for all that you’ve done, from the bottom of my heart to the top of my head. No further questions,” Oneal said.

Earlier in the day, jurors heard testimony from Billy Smith, Ronnie Oneal’s stepdad who talked about a frantic late-night call.

He told jurors the call woke him up and didn’t last long.

Smith: “There was so much noise behind the background of the phone and the next thing I know the phone went dead.”

State: “Did you try and call him back?”

State: “Did anyone answer the phone?”

Smith and his wife rushed to the home to find a crime scene and then rushed to Tampa General Hospital where Oneal’s son was being treated for 2nd and 3rd-degree burns and stab wounds.

“He was in critical condition, he was on a ventilator and had a tube in his trachea in order to breath, he had multiple tubes in his neck and chest,” said Carol Marie Lilly, a pediatrician at USF.

A rare and intense situation played out in court as Ronnie Oneal III questioned his son. 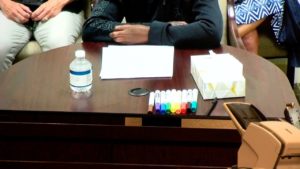 State attorney Ron Gale wasted little time getting into details toward the young boy about what happened to his mother and sister in 2018. He was just 8-years-old at the time.

State: “Do you remember the night when something bad happened to your mother and your sister?”

Little boy: “Yes. I was sitting in my room and I saw my mom and my dad arguing.”

He told the state that he went to the back bedroom and saw his dad holding a shotgun. Shortly after that, he saw his mom run into his sister’s closet and hide. He was in the living room when he recalls Oneal telling him to come to the bedroom and help him kill his mother.

“I went into the room and he handed me the shotgun and helped me shoot it,” the little boy testified.

But he said he couldn’t remember if the gun went off while he held it. He told the state he saw his dad kill his sister and then he said Oneal III came after him.

“I was laying on my stomach, and he had his foot on top of me, he was holding me down,” he said.

He said his dad attempted to light him on fire but couldn’t remember much more after that besides walking outside.

“I just remember going to someone and saying that my dad killed my mom and then I got a mask put on me and then I don’t remember anything from there,” said the boy, who is now 11.

Oneal III was eventually able to cross-examine his son.

Judge Michelle Sisco noted on the record, “Mr. Oneal appeared to be in command of the facts and knew the points that he was trying to get across, and I feel that he did so competently.”

This story was originally published June 17, 2021, by WFTS in Tampa Bay.