WASHINGTON (AP) — The Supreme Court made it easier Monday for certain prison inmates to seek shorter sentences under a bipartisan 2018 federal law aimed at reducing racial disparities in prison terms for cocaine crimes.

The justices ruled 5-4 that trial judges who are asked to resentence inmates may look at a wide range of factors, including some that have nothing to do with crack cocaine offenses that had produced longer stints in prison, disproportionately for people of color. 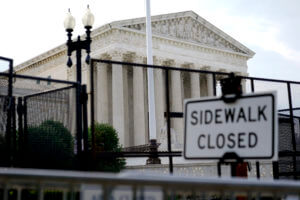 The high court settled a disagreement among the nation’s appellate courts over what judges should do in these cases.

The case before the justices involved Carlos Concepcion, who is serving a 19-year sentence after he pleaded guilty to possessing at least five grams of crack cocaine with an intent to distribute.

But the length of Concepcion’s prison term really was determined by previous state court convictions that made him a career offender under federal law.

In 2019, Concepcion asked for a reduced sentence under the First Step Act that President Donald Trump signed into law a year earlier. Concepcion argued that the law made him eligible for a shorter term, but he also pointed to his earlier convictions, one of which had been thrown out and others of which were no longer considered violent crimes under intervening Supreme Court decisions.

Still, the judge refused to consider changes to his sentence.

“The District Court in this case declined to consider petitioner Carlos Concepcion’s arguments that intervening changes of law and fact supported his motion, erroneously believing that it did not have the discretion to do so,” Justice Sonia Sotomayor wrote in her opinion for the court.