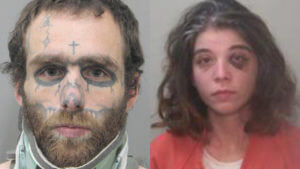 LAS VEGAS (AP) — A prosecutor in Nevada said Tuesday that three people from Texas could face terrorism and hate-crime charges following several Thanksgiving day shootings in suburban Las Vegas, including one that killed a man at a convenience store, and more shootings before their arrests in rural Arizona.

Kevin Mendiola Jr., 22, of North Las Vegas, was killed and three other people were wounded in one shooting at a Henderson convenience store. Schwartzer said other people including motorists reported being targeted on southern Nevada freeways and roads before 1 a.m. Nov. 26.

“Once we get our arms around this, it’s going to be quite a case,” Schwartzer said. “We’re still trying to find out what happened.”

The McDonnells are brothers and Lewis is married to Christopher McDonnell, Schwartzer said. Clark County District Attorney Steve Wolfson has said the three were from Tyler, Texas. Their prosecution in Las Vegas could include crimes in Nevada and Arizona under a court doctrine of “long-arm jurisdiction.”

The trio was arrested Nov. 26 following several vehicle-to-vehicle shootings in the area of the Colorado River town of Parker, Arizona; a chase involving the Arizona Department of Public Safety; a vehicle crash; and the wounding of Shawn McDonnell by two troopers wielding assault-style rifles in La Paz County, Arizona.

Troopers reported that Shawn McDonnell pointed a handgun at them before he was shot, and that a search found three handguns, two machete-style knives and a baseball bat in a wrecked black Toyota Camry with tinted windows.

McDonnell’s court-appointed attorney, Curtis Brown, said later that it was too early to comment about the case.

Schwartzer said Christopher McDonnell told investigators his brother told him to “shoot the black guy” and referenced an “upcoming war,” and the multiple instances of shootings on highways and roads could constitute one continued act of terrorism, the Review-Journal reported.

The La Paz County sheriff’s office said investigators identified three who said they were victims of vehicle-to-vehicle shootings on U.S. 95 in the Parker area and two more who drove to Lake Havasu before stopping.

Lewis was being held at the La Paz County jail pending a court hearing, and Shawn McDonnell was hospitalized with gunshot wounds.

“We have not tied anything or anyone together and we believe the victims were random,” the statement said.