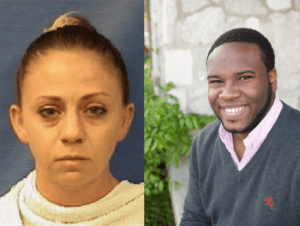 Guyger is the white Dallas, Texas police officer accused of murdering an unarmed black man in his home on September 6, 2018. This case has been shrouded with speculation because the presiding judge, the Honorable Tammy Kemp, has kept things hush-hush.

In fact, the Judge issued a gag order on January 8, 2019 stating “as a result of statements made to, and published by, the press, a serious and imminent threat to the constitutional right of the defendant herein to a fair trial exists.”

And props to Judge Kemp. Is there anything more precious in law than the sanctity of the judicial process?

So as testimony unfolds, a clearer picture will certainly emerge of what occurred the night Botham Jean was killed. Nevertheless, here’s what we know – and what we need to find out – to understand why an unarmed 26-year-old accountant was shot to death inside his apartment doing nothing but watching football on his couch.

According to the affidavit prepared by the Texas Rangers in support of the arrest warrant, it was just before 10 p.m. on Thursday, September 6, 2018, when 30-year-old Guyger arrived home to the South Side Flats. She was in uniform, but off-duty, having just completed an approximately 15-hour shift.

What we need to know:

The aforementioned arrest warrant affidavit also states Guyger got off on the wrong floor in the parking garage, which is numerically labeled. Jean lived on the fourth floor in Apartment 1478 and Guyger lived on the third floor, directly below Jean, in Apartment 1378.

Here the questions are:

The arrest warrant affidavit further states Guyger inserted her key in the apartment door she believed was hers – she says the door was unlocked and slightly ajar – the door then opened. Guyger says the lights were off inside the apartment, she saw a figure in the darkness that cast a large silhouette across the room, she thought she was being burglarized and gave verbal commands to the figure, which were ignored. Guyger then drew her weapon and fired twice.

The Dallas County district attorney’s office seized the locks and the accompanying electronic data, which may literally unlock the key to this case.

The lock data is expected to show:

Lee Merritt, the Jean family’s attorney – who represents the the family in a wrongful death suit against Guyger and the City of Dallas – claims that two witnesses, who are sisters, have come forward to say they heard knocking on the door in the hallway before the shooting. Merritt says one witness reported hearing a woman’s voice saying, “Let me in, let me in.” Then, according to Merritt, the witnesses heard gunshots. Merritt says one of the sisters is expected to testify at the criminal trial.

Such allegations beg the question(s):

If the lock data reveals Jean’s door was locked, it would corroborate Merritt’s claims that witnesses heard someone banging on Jean’s door yelling “let me in!”

Guyger was initially charged with manslaughter, was then indicted on murder in the first degree. A jury has been selected and opening statements are expected Monday morning.

And then the ultimate question will begin to be answered……was this, in fact, murder?