NEW YORK (AP) — Many have heard of the murder case of Kathleen Peterson, a North Carolina woman found dead at the bottom of her staircase in 2001. Her husband, Michael, was convicted in her death and the case is the subject of the documentary series “The Staircase” on Netflix. 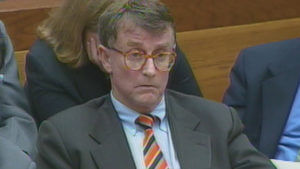 Michael Peterson is on trial for the 2001 death of his wife, Kathleen. Her body was found at the bottom of a staircase in the couple’s Durham home. (COURT TV)

Despite the hours of television already devoted to the case, a new series for HBO Max is debuting May 5, also called “ The Staircase.” Created by Antonio Campos and starring Colin Firth and Toni Collette, it builds on what we already know with new perspectives on the story.

For one, the show breathes life into Kathleen Peterson, whose story no longer begins and ends on Dec. 9, 2001, when she died.

That was important to Collette who feels Michael Peterson has had all the attention for too long.

“He’s such a narcissist. I didn’t want to fan his narcissistic flame and give him any more kind of air time, especially if what he did was bad, which we will never know,” Collette said. The show, she added, provides an opportunity to show Kathleen as “something beyond a victim.”

In flashbacks leading up to her death, Collette portrays Kathleen as the glue who held her big, blended family together, and was also the breadwinner.

“She was a force of nature and an incredible matriarch,” said Collette. “She was there emotionally for all of those kids. She was a compassionate leader at work. She had a big life and it was just ripped away.”

This “Staircase” also examines the individual lives of the couple’s kids: Michael’s two sons, Todd and Clayton, with his first wife, their two adopted daughters, Margaret and Martha, and Kathleen’s daughter, Caitlin.

“The majority of time we spend with these people in the documentary, they’re always either in the company of Michael or through Michael’s eyes,” said Odessa Young, who plays Martha. “What I really adore about our series is its primary interest is in fleshing out who these people are and how exactly they were affected and how this family appeared to the people around them.”

The documentary crew even gets introduced in the series. We see how in private they would analyze what they were seeing.

“They all stayed together and every night they would debate whether Michael Peterson was guilty or not,” said Vincent Vermignon, who plays director Jean-Xavier de Lestrade and spoke to him extensively about the role.

Actors tend to pride themselves in being non-judgmental of their characters in order to achieve a believable performance. That technique went out the window with “The Staircase,” where the cast found themselves also discussing the case and trying to figure out what happened.

Adds Young: “At some point, I think we all kind of came to this place when we were shooting, where it just became way too time-consuming to keep speculating and to keep thinking that maybe we could be the ones to figure it out.”

Sophie Turner, who plays Margaret, said, “By the end I was exhausted. I walked away with less of an opinion of what happened than when I went into it.”

Instead of trying to understand his character, Firth ultimately leaned into the complexities of Michael Peterson.

“In the end, I felt the best way was to yield to that. If it’s not clear, play it that it’s not clear. I think it speaks to the object of this whole exercise, actually, and the way that this was written and conceived, which is it does resist clarity. And it speaks to our desire for clarity. We want it. We want certainty. We find doubt uncomfortable.”