SAN DIEGO (KGTV) – The TikTok star accused of murdering his wife and another man was back in court Monday.

Ali Abulaban had a number of outbursts during the continuation of his preliminary hearing. He interrupted San Diego Police Detective Christopher Leahy’s testimony as his attorney questioned him regarding the relationship between Abulaban’s wife Ana and Raymond Barron.

Both were shot and killed in the Spire East Village High Rise in October. Detectives say the video shows Abulaban going to his estranged wife’s apartment, followed by the sound of six gunshots. 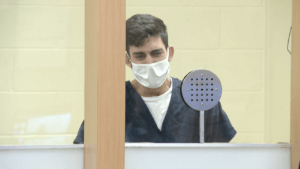 FILE – TikTok star Ali Abulaban, who is accused of murdering his estranged wife and another man appears in court on Jan. 24, 2022, in San Diego. (KGTV)

In court, it was revealed the couple had a rocky marriage prior to the shooting. Prosecutors say Ana wanted to leave the relationship. Days before the shooting, Abulaban moved out of their apartment.

Just before the detective finished up his testimony, another outburst from Abulaban prompted the judge to call for a break as he was escorted out of the courtroom.

At the end of the preliminary hearing, the judge determine that Abulaban will stand trial on murder charges.

This story was originally published Jan. 24, by KGTV in San Diego, an E.W. Scripps Company.