NEW YORK (AP) — Trayvon Martin’s final night began with a convenience store run, a quick trip for candy and something to drink. It ended in a confrontation with a neighborhood watch volunteer, a shot fired, the 17-year-old dead on the street.

It might have been expected to end there — the violent deaths of Black teenagers have rarely drawn even fleeting attention.

But the killing of this baby-faced, hoodie-wearing, unarmed youth at the hands of a stranger still reverberates 10 years later — in protest, in partisanship, in racial reckoning and reactionary response, in social justice and social media.

“It was the thing that broke everybody, all at the same time,” said Nailah Summers-Polite, co-director of Dream Defenders, an organization founded in Florida during the protests following Martin’s death. 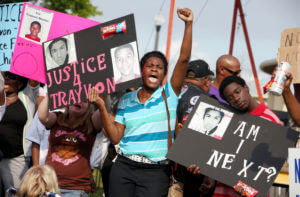 In this March 22, 2012 file photo, protestors, Lakesha Hall, of Sanford, center, and her son, Calvin Simms, right, participate in a rally for Trayvon Martin, the black teenager who was fatally shot by George Zimmerman, a neighborhood watch captain in Sanford, Fla. The killing of Trayvon Martin at the hands of a stranger still reverberates 10 years later — in protest, in partisanship, in racial reckoning and reactionary response, in social justice and social media. (AP Photo/Julie Fletcher, File)

“We’re the Trayvon Martin generation, we are the people who were moved into action because of it.”

It happened on Feb. 26, 2012. Martin was visiting his father in a gated community in Sanford, Florida, a suburb of Orlando. Walking on the way back from the store, he was eyed by George Zimmerman, then 28, a member of the community’s neighborhood watch.

The initial police report said Zimmerman called authorities to report a suspicious person, a guy who, he said, “looks like he’s up to no good.” When Zimmerman said he was following the man, a dispatcher said, “We don’t need you to do that.” But armed with a gun, Zimmerman got out of his car.

In the confrontation that followed, Zimmerman would tell authorities, Martin attacked him, forcing him to use his gun to save himself. Zimmerman was allowed to go free.

From the start, Martin’s parents, Sybrina Fulton and Tracy Martin, were outraged. They questioned Zimmerman’s account. Had their son had been profiled as “suspicious” merely because he was Black? Zimmerman’s family was adamant that their son and brother, who identified as Hispanic, was not racist.

As media attention picked up in early March, others joined in, first locally and then far beyond.

For many Black people, the idea that Trayvon had been profiled because of his race hit a nerve, echoing their own experiences in all walks of life. In his death they saw their own vulnerabilities.

“It felt like, `Oh, wow, I can’t walk down the street, even in the realm of my everyday life, normal happenings, that could have easily been me,’” said Jonel Edwards, another co-director of Dream Defenders.

It was especially jarring in 2012, when the occupant of the White House was Barack Obama, the country’s first Black president. His election had some insisting that America had turned a real corner in its troubled racial story; even many skeptics thought there had been progress. 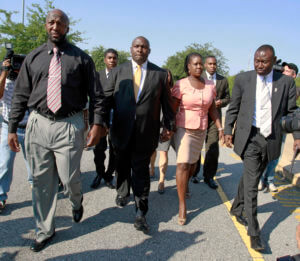 And yet, Martin was dead. The United States “had elected a Black president and had a Black attorney general, and they are still killing us and not even arresting the killer … we all saw our kids were still vulnerable,” said the Rev. Al Sharpton, who early on met with Martin’s family and their attorney Ben Crump as they worked to draw more attention to his death.

For years, police killings of Black people — like Amadou Diallo in 1999, Sean Bell in 2006 and Ramarley Graham, just weeks before Martin’s death — had caused outrage. But Zimmerman “was not law enforcement,” said Jenner Furst, co-director of the documentary, “Rest in Power: The Trayvon Martin Story.”

Said Sharpton: “I think the fact that it wasn’t a real police officer made it even more egregious” that authorities didn’t take action. “Here is a wanna-be security guard … There’s no reason for reluctance here.”

As word spread of Martin’s death, many looking to speak out turned to the digital space. Social media had already shown its potential as a platform for protest, and now the trend went into hyperdrive.

Kevin Cunningham, then a 31-year-old graduate of Howard University’s law school who was working as a social media consultant for a Muslim organization, had been intrigued by the power of social media since he saw the role it played in the 2011 Egyptian revolution. He posted a petition on Change.org calling for Zimmerman’s prosecution, and it soon had about 10,000 signatures.

That number increased exponentially when he turned the petition over to Martin’s parents, who made a personal plea for support for Zimmerman’s prosecution. Celebrities on social media encouraged people to sign. In the end, more than 2.2 million people signed on to the petition.

“It was the right place and time as far as that adoption of social media and just sort of the right egregious case that was able to touch people’s hearts,” Cunningham said.

While Zimmerman set up a site to seek donations to help his defense, his online detractors were many. Social media brought together multitudes for protests like the Million Hoodie March, as well as countless celebrities and everyday folk who posted images of themselves wearing hoodies with the hashtag, “I am Trayvon Martin.”

Among them: LeBron James, then playing with the Miami Heat, who posted an image of him and his teammates wearing hoodies, their heads bowed.

Obama himself was drawn into the furor, framing it in terms no other president could.

“I can only imagine what these parents are going through. And when I think about this boy, I think about my own kids,” Obama said.

Six weeks after the shooting, Zimmerman was charged with second-degree murder; he would be acquitted the next year. But the ferment unleashed by Trayvon Martin’s death did not stop. 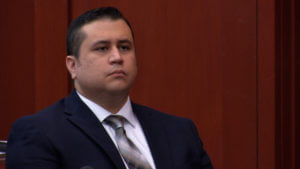 In this image from video, George Zimmerman appears in court on June, 10, 2013 during his murder trial in Florida. (Court TV)

The verdict inspired a Facebook post written by Alicia Garza, a hashtag created by Patrisse Cullors and a social media strategy spearheaded by Ayo Tometi — and the result was Black Lives Matter, a movement to combat racism and racial violence against Black communities.

And many of the same demonstrators incensed by Martin’s killing took to the streets to protest the death of Michael Brown, 18 and unarmed, killed by a police officer in Ferguson, Missouri, in August 2014, just weeks after Eric Garner, also unarmed, was killed by police in New York City.

“The moment of Trayvon Martin really opened our eyes,” said Edwards, of Dream Defenders, adding “there was much more of a general consciousness that had started in 2012 that then erupted in 2014.”

Then the 2020 death of George Floyd, killed by Minneapolis police, brought out a wide range of people around the country and the world.

“When the George Floyd tragedy happened, we all saw what played out with Trayvon,” film director Furst said. “And so many people said, never again, this cannot happen that way again.”

But that public anger also inspired a reaction. There have been those who took exception to Obama’s words of affinity to Martin, and saw the protests as anti-police chaos and disorder.

Others acknowledge that Martin’s death and its aftermath changed the country, but question whether the change was even remotely sufficient.

Sharpton, while disappointed that there has not been more federal legislation put into place, said a “cultural change” has happened.

He pointed to the case of Ahmaud Arbery, the 25-year-old Black man chased and killed in 2020 by three white men who saw him running in their Georgia neighborhood. The shooter in that case also claimed self-defense, but an almost entirely white jury found them all guilty.

“I think Trayvon shifted the culture where people started looking at things a little differently and nothing to me personifies that more than Arbery,” Sharpton said. “These two young men, I think, are the two pillars where we are on race.”