The slaying of Peter R. de Vries triggered a national outpouring of grief and government pledges to crack down on Amsterdam’s increasingly violent drugs underworld. 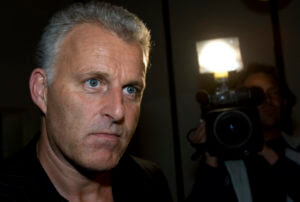 Prosecutors accuse a 21-year-old Dutchman identified only as Delano G. of shooting De Vries at close range in a downtown Amsterdam street on July 6 last year. The campaigning reporter and television personality died nine days later of his injuries at age 64. The second suspect on trial is a Polish national, identified as Kamil E., who is the alleged getaway driver.

In a closing statement at their trial, prosecutors cited the “extremely serious” nature of the crime, the suspects’ lack of remorse, and a string of previous underworld murders as reasons for demanding life sentences.

Judges at Amsterdam District Court reviewed a dossier of evidence prosecutors say links the men to the slaying, including telephone text messages and video footage.

In the afternoon, De Vries’ son, Royce, and daughter Kelly used victim impact statements to emotionally recall his campaigning journalism and the way he managed to combine his work with his family.

“I can still bring myself to treat you humanely,” Kelly de Vries told the suspects. “Why? Because that’s the way I was raised. Brought up by two wonderful parents who stood up for what was right. Even though it was not an easy path; who dared to stand up for people who had been wronged.”

She called De Vries “My dearest father, my buddy, confidant and caring grandfather for my child.”

Royce de Vries told judges: “I’m convinced that if these suspects had asked my father for help that evening, he would have given it,” Dutch broadcaster NOS reported. “Instead, they pulled the trigger.”

Lawyers for the suspects are scheduled to speak at a separate hearing next week, Judges are due to deliver verdicts July 14.

A judge in Tuesday’s hearing directly asked G. if he shot De Vries, to which the suspect replied: “I make use of my right to silence,” according to footage recorded by NOS. The other suspect said: “I did not kill that man.”

Prosecutors say the two suspects were arrested less than an hour after the shooting in a getaway car on a highway near The Hague with the weapon used to shoot De Vries in the car.

Also in the car was a mobile phone, that prosecutors say contained messages alluding to the killing. One of the judges in the case read out the messages during Tuesday’s hearing.

One exchange included two pictures of De Vries and the message: “You have to get this dog.” 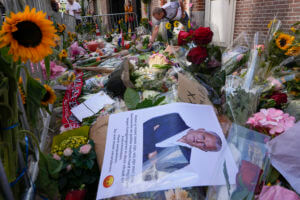 Later, a message from the phone found in the car read: “He’s dead … everyone screaming. He didn’t move anymore.”

Prosecutors haven’t publicly identified a suspect they believe gave the order to kill the reporter, who had just appeared on a Dutch current affairs television show.

De Vries made his name as a crime journalist who reported on and wrote a bestselling book about the 1983 kidnapping of beer magnate Freddy Heineken. Later in his career, he campaigned tirelessly to resolve cold cases. Before his shooting, De Vries had been an adviser and confidant for a witness in the trial of the alleged leader and other members of a crime gang that police described as an “oiled killing machine.” The witness’ brother and his lawyer both were murdered.

The suspected gangland leader, Ridouan Taghi, was extradited to the Netherlands from Dubai, United Arab Emirates, in 2019 and is currently standing trial. He hasn’t been charged in De Vries’ killing.

Mike Corder contributed to this report from The Hague.