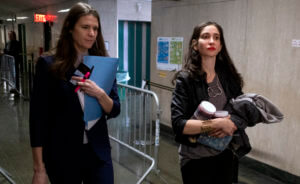 The one-time aspiring actresses, Tarale Wulff and Dawn Dunning, are expected to describe those experiences from the 2000s with the disgraced movie mogul when they take the witness stand Wednesday at a New York City rape trial seen as a milestone for the #MeToo movement.

Prosecutors are using the two so-called “Molineux” witnesses to bolster their case against Weinstein. The judge has allowed them to testify about “prior bad acts” that didn’t result in criminal charges because of the statute of limitations and other legal issues.

Weinstein, 67, is charged with forcing oral sex on then-”Project Runway” production assistant Mimi Haleyi in 2006 and raping another aspiring actress in 2013, who could testify later this week. He’s insisted any sexual encounters were consensual and zeroed in on his accusers’ continued contact with him after the alleged assaults.

The Associated Press does not typically identify people who say they have been victims of sexual assault, unless they agree to be named or gone public with their stories as Haleyi, Wulff, Dunning and “Sopranos” actress Annabella Sciorra have done.

After Wulff read, Hast said, a driver took her to Weinstein’s apartment. There, the much bigger and heavier Weinstein pushed her onto a bed and raped her, the prosecutor said.

Dunning alleges Weinstein fondled her genitals during a business meeting in his hotel suite in 2004 and on another occasion offered her three small movie roles, but only if she had three-way sex with he and his assistant.

“Dawn tried to laugh it off, make a joke of it, but the defendant got angry,” Hast said. “‘This is how the industry works,’ he screamed at her. ‘How do you think other actresses got ahead?’”

Jurors so far have heard a tearful Haleyi say how she tried to fight off Weinstein before he sexually assaulted her. Last week, Sciorra testified that Weinstein overpowered and raped her after barging into her apartment in the mid-1990s.

On Tuesday, it was Elizabeth Entin, Haleyi’s former roommate, who took stand to corroborate Haleyi’s testimony. Before the alleged attack in Weinstein’s Soho apartment, Entin said, the friends viewed Weinstein as a “pathetic old man” for pursuing Haleyi, and were amused when her pet Chihuahua, Peanut, once chased him around their own apartment in the East Village.