Federal prosecutors said Wednesday they will not seek the death penalty against a man accused of killing three people and injuring nine others at a Planned Parenthood clinic in Colorado in 2015. 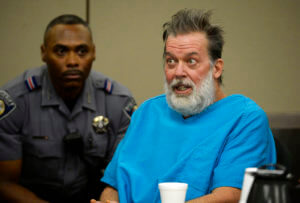 FILE – In this Dec. 9, 2015, file photo, Robert Dear talks to Judge Gilbert Martinez during a court appearance in Colorado Springs, Colo. Federal prosecutors said Wednesday, Dec. 2, 2020, they would not seek the death penalty against Dear, accused of killing three people and injuring nine others at a Planned Parenthood clinic in Colorado in 2015. Prosecutors have repeatedly deemed incompetent to stand trial. Dear, however, has insisted he is competent. (Andy Cross/The Denver Post via AP, Pool, File)

U.S. Attorney Jason Dunn submitted a one-sentence notice of the decision concerning Robert Dear that did not include any explanation of the reasons for it.

The move comes about a year after Dear was charged in federal court in the shooting after his prosecution in state court stalled. He had been repeatedly deemed incompetent to stand trial. Dear, however, has insisted he is competent.

During his initial appearance in federal court a year ago, he interrupted the proceedings to criticize evaluations at the state mental hospital in Pueblo, insisting the process is unnecessary and complaining that it was not videotaped.

Last month, a judge ordered Dear to undergo a federal competency examination once his lawyers and prosecutors worked out the details of where it would take place.

Dear is facing 68 counts in the federal case, including use of a firearm during a crime resulting in death and violating a law ensuring access to clinic entrances.