NEWPORT NEWS, Va. (WTKR) – A high school student has been arrested after the fatal shooting of another teen on Tuesday night.

Police responded to the scene where a teenager died in a shooting after a basketball game at Menchville High School against Woodside High School.

Newport News Police said during the game, there was video footage showing gestures back and forth inside between people. A very large crowd exited the game into the parking lot once the game concluded. 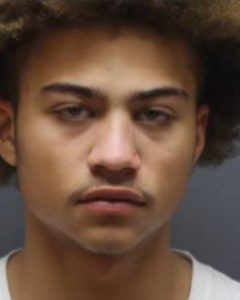 On Wednesday, Police Chief Drew said one person went to a vehicle then an altercation happened beside that vehicle and that person was shot. The victim has now been identified as 17-year-old Justice Dunham, a student at Woodside High School.

Officers gave first aid and CPR to Dunham, but he died from his injuries at the scene.

Chief Drew said an individual was detained and taken to be interviewed Tuesday night. As result of that interview, 18-year-old Damari Batten who is a student at Warwick High School was arrested.

According to court documents, Batten was identified by witnesses as a person in possession of a firearm during the fight. After he was detained, he allegedly told officers he was “jumped.”

Court documents say Batten said he left the game early due to a feud with a group who were in attendance at the basketball game. He allegedly walked to his friend’s car alone and let himself in, then decided to stand next to the vehicle. He was then allegedly approached by four or five people he recognized as part of the group he was feuding with.

Court documents say that Batten said he entered the vehicle and attempted to close the door, but one of the people held the front passenger door and attempted to assault him while others were at the driver’s door attempting to enter the vehicle and assault him. Batten said he then grabbed a firearm on the floorboard next to his left foot and fired it at the driver’s side to get the people away from him.

Police added that three firearms were found at the scene. One was used in the shooting death of Dunham and two others were in the car that Dunham arrived to the game in.

There were five officers working at the game Tuesday night and police said on Wednesday that they are looking into the possibility that this incident was gang related but did not give any more information at this time.

The shooting at Menchville High School came after three other shootings Hampton Roads over the weekend. On Tuesday, Newport News officials held a CARE Walk on Brighton Lane, where another deadly shooting happened.

There was also a report of a shooting the same night near Big Bethel Road but police said there were no injuries reported or property damage.

This story was originally published Dec. 15, 2021, by WTKR in Newport News, VA, an E.W. Scripps Company.