In the majority of all murder cases, the victim’s character is off-limits at trial. It’s like the press talking smack about politicians’ kids. You just don’t do it.

With the Bush twins or the Obama girls, it was more of an unwritten-rule situation. But under the law, concerning murder victims, “evidence of a person’s character or a trait of the person’s character is typically not admissible for the purpose of proving that the person acted in conformity therewith on a particular occasion.”

Ezra McCandless, 22, appears in court during her trial in Menomonie, Wisconsin on October 15, 2019. (COURT TV)

Ezra McCandless, 22, is being accused of killing her former lover, Alex Woodworth, on March 22, 2018. The prosecution says it was murder. The defense says it was self-defense.

Whoa. Who exactly is on trial here?

And how does the Defense plan to get all this in? Through just Ezra McCandless? (Her lawyers told Court TV she plans to testify.) 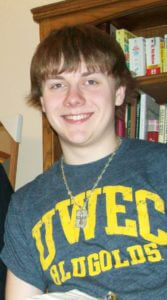 The Defense has proposed a laundry list of items they intend to introduce evidence including:

But first things first, if Ezra McCandless was acting in self-defense, she will have to demonstrate:

It is that “reasonable” part of self-defense that can only be demonstrated by showing what was in McCandless’ mind. What was in her mind, according to the defense, was a combination of what immediately preceded the killing on March 22, plus the history McCandless had with Woodworth.

The defense contends that history between McCandless and Woodworth was punctuated with violence and aggression – both in and out of the bedroom. Additionally, the defense claims that Woodworth’s writings, journals, and annotated philosophical works “prove his fascination with hedonism, nihilism, cannibalism, violence, death, and mutilation.”

The case that controls this issue, McMorris v. State, says when self-defense is raised in a prosecution for homicide – with a factual basis to support such a defense – the individual claiming self-defense may establish what she believed to be “the turbulent and violent character” of the decedent.

The Court went on to hold: “When the individual maintains self-defense, [she] should be permitted to show [she] knew of specific prior instances of violence on the part of the victim.”

Both sides acknowledge that the Wisconsin case law allows “other acts and character evidence” of Alex Woodworth “to be introduced to support a self-defense argument only if the individual maintaining self-defense was aware of the other acts.”

Sure, McCandless can testify to allegations of violence by Woodworth that she was a recipient of, but the defense will have to demonstrate she knew of his writings and his philosophies as well. They submit “Woodworth shared the contents of his journals with McCandless over time and by March 22, 2018, McCandless had complete knowledge of his writings.”

To be clear, the prosecution is not on board with the victim’s journals or books being entered into evidence, nor are they thrilled with allegations that Woodworth was violent. However, given the defense is allowed to put forth such evidence, the prosecution is thus allowed to bring in testimony that Alex Woodworth had a reputation for peacefulness.

All this back and forth has resulted in sidebar upon sidebar and oral arguments galore.

Although all this has been argued for months – through motion practice prior to trial – what is allowed and what is prohibited, is not yet set in stone. There is a chance, McCandless could change her mind about testifying, which would then remove the defense’s necessary foundation that allows negative testimony about Woodworth in.

And let’s not forget, the State could use their rebuttal case to turn around any negative portrayal of the victim. Bottom line – the way these lawyers have been duking it out, we can expect the legal battle to continue for the remainder of the trial.