UPDATED 2/7/20: Judge James M. Peterson sentenced Ezra McCandless to life in prison with eligibility for supervised release after 50 years for the first-degree murder of Alex Woodworth.

UPDATED 2/6/20: Ahead of her Feb. 7, 2020 sentencing date, McCandless and her family have set up a GoFundMe campaign to fund her appeal. Her previously private Instagram account has also been made public, featuring artwork she drew during her trial.

UPDATED 11/1/19: A jury has found Ezra McCandless guilty of first-degree murder for the murder of her boyfriend, Alex Woodworth. Her sentencing has been set for Feb. 7, 2020. She faces a potential life sentence.

A Wisconsin woman accused of stabbing one of her three lovers to death is facing life in prison.

Ezra McCandless, 22, allegedly murdered 24-year-old Alex Woodworth on March 22, 2018, in the Town of Spring Brook. McCandless claims her actions were in self-defense. Prosecutors say she intentionally lured Woodworth to his death to rid herself of inner turmoil.

The tangled web that led to Woodworth’s death reportedly began in November 2017, when McCandless, who occasionally identifies as male, began having a sexual relationship with the victim. During that time, the defendant was dating serviceman Jason Mengal. She reportedly had an abortion sometime between then and February 2018.

In February 2018, Mengal left for two weeks for military training. Over those two weeks, McCandless claims she continued her affair with Woodworth and was raped twice by Mengal’s best friend, John Hansen.

When Mengal returned, he reportedly became furious at McCandless’s allegations and filed a police report against Hansen. Woodworth was interviewed as part of the police investigation. He told authorities McCandless confided in him she willingly had sex with Hansen and later regretted it. The investigation was ultimately closed.

On March 22, McCandless reportedly drove to Woodworth’s home to officially end their relationship and return some of his things. The two went for a drive, which McCandless claims is when Woodworth became angry after she told him she wanted to be with Mengal. 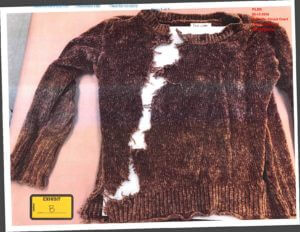 When the car got stuck on a muddy road, McCandless claims Woodworth tried to sexually assault her outside of the vehicle, saying, “I want you one last time. I deserve one last time.” He then allegedly began cutting her clothes off with a knife, cutting her body in the process.

McCandless claims that’s when she fought Woodworth off, grabbed the knife and began stabbing him “everywhere and anywhere.” Investigators say he suffered sixteen stab wounds.

After stabbing Woodworth, the defendant ran to a nearby property. The homeowner called the police when a bloody, muddy McCandless came to his door. 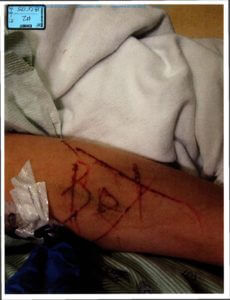 McCandless was taken to a hospital, where she told authorities Woodworth tried to rape her and cut the word “boy” into her arm. Woodworth’s body was found the next day.

During the investigation, McCandless’s story reportedly changed. Two days after the alleged attack, she admitted to investigators she cut the word “boy” into her arm after doctors pointed out the wound could’ve been self-inflicted. She also told police the alleged attack happened inside the vehicle.

McCandless was charged with first-degree intentional homicide on April 6. She pleaded not guilty by reason of mental disease or defect, which she ultimately withdrew.

Salacious details about the defendant and victim are expected to be revealed during the trial. The defense claims Woodworth was a sexual sadist and held a fascination for ritualized cannibalism. They will reportedly present evidence of Woodworth’s journal entries that support McCandless’s claims their sexual relationship was violent. The defendant and Jason Mengal are also expected to testify.

Prosecutors claim by murdering Woodworth, “the defendant was taking control of her life by seeking out (the victim) to permanently remove the bad memories of their relationship and abortion, the guilt of her infidelity with John Hansen, and here associations as a male in their relationship.”

McCandless was named Monica Karlen until 2015. She occasionally identifies as male.