PERRY, Fla. (WTXL) — A woman who was a teacher at a private Christian school during the previous school year was arrested for a second time, after previously being accused of sexting with a student. 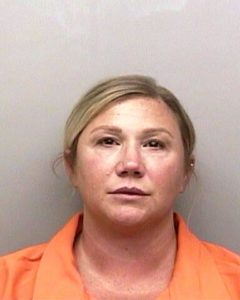 According to Taylor County Sheriff’s Office, Julie Hoover, 39, is facing a misdemeanor charge of contributing to the delinquency of a minor and a second felony charge of an authority figure soliciting or engaging in lewd behavior with a student. She was booked into the jail on Sept. 6, 2022.

Hoover was charged due to what a student told investigators occurred at Point of Grace Christian School’s prom on April 8. According to the student, Hoover pressured him to drink an alcoholic beverage and placed a straw from the beverage in his mouth.

The student also stated Hoover came over to where he danced and began “twerking” on him, which made him feel uncomfortable. There were reportedly others that witnessed her behavior and attempts to give the student alcoholic beverages.

Two other witnesses met with investigators and confirmed the statements made by the student.

Back in June, Hoover was arrested for sexting with an 18-year-old student at the school.

According to the school’s website, Hoover is not listed as a teacher.

The student’s mother spoke with deputies after discovering explicit messages between Hoover and the teen. According to the court document, the messages displayed Hoover making arrangements to sneak the student into her home while her husband was at work.

Hoover faced a felony charge of authority figure soliciting or engaging in sex conduct with a student.

This story was originally published Sept. 7 by WTXL in Tallahassee, an E.W. Scripps Company.