PHOENIX (KNXV) — The Phoenix officer who recently went hiking with a woman found dead on Camelback Mountain told detectives he also got lost after they separated halfway up the climb and was not familiar with the trail, according to a city spokesperson.

Officer Dario Dizdar’s official statements to investigators contradict initial accounts given by fire officials at the July 30th scene, and an incident report filed by a park ranger who spoke with him on the mountain.

During the search for Angela Tramonte, a fire department spokesperson said Dizdar told crews “he was very familiar with this mountain” and that “he hikes it this time of day all the time from the top to the bottom.”

Fire officials asked KNXV this week to discontinue using that statement because they said they misunderstood Dizdar at the time.

But a Phoenix park ranger also claimed that Dizdar told him he hiked Camelback often.

“They started hiking together around 10 am with no water but split up. The boyfriend stated that he was a local and did this hike all the time and she was going to go as far as she could and turn around,” according to an incident report filed by the park ranger.

A Phoenix police spokesperson said their department does not know what specific questions were asked by fire and park personnel.

But during his subsequent interview with detectives, Dizdar reported it was his first time hiking the Echo Canyon Trail. He also said he got lost and needed to take an Uber back to the trail’s parking lot.

Dizdar is not considered a suspect by his department. The police spokesperson said he is cooperating and there is no indication of foul play.

Tramonte is from the Boston area and came to Phoenix to meet Dizdar for the first time. The two had been chatting online.

She died less than 24 hours into her trip.

While outside Phoenix police headquarters on Thursday following a press conference regarding the DOJ’s sweeping investigation into the department, a KNXV news crew spotted Dizdar walking into the building.

He told KNXV’s Zach Crenshaw that the reporting about him was false. But Dizdar declined to elaborate.

Crenshaw did not get a chance to seek further comment from Dizdar because he did not exit the same way he entered.

Police public information officers took Dizdar’s car keys and moved his parked vehicle away from the front of the building. 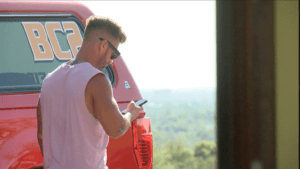 Fire crews and police officers tried pinging her cell phone. However, it did not narrow down the area enough. Fire crews were then able to have a friend of Tramonte use an iPhone application to get a more accurate ping.

With the narrowed location showing an area far off the trail, police officers went door to door in a neighborhood and eventually found her in a backyard.

The Phoenix Police Department’s full response to questions for this report are below.

“Information released initially, is information that was known at the time. I would also like to point out that there are different trails within Camelback Mountain, and we do not know what specific questions were asked by fire and park personnel prior to our detective speaking to the witness. The conversation between the witness and our detective was recorded. That interview indicates the witness reported this was his first time hiking the Echo Canyon Trail. This continues to be an ongoing death investigation with no indication of foul play. The witness continues to cooperate and has provided all information to our investigators. Some of the information provided includes cell phone information.

During a preliminary examination of the phone, investigators did see photos from the top of Camelback Mountain taken that day, and proof of a rideshare trip used by the witness when he got lost.”

This story was originally published August 6, 2021, by KNXV in Phoenix.