HARTFORD CITY (WRTV) — A woman who pleaded guilty to a drunken driving crash earlier this year in Blackford County, Indiana that killed a child and his grandfather and injured others has been sentenced to 57 years in prison. 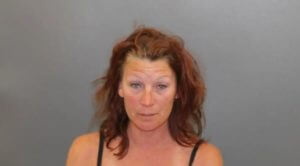 A Blackford County judge handed the sentence down to Brandi Bare last Friday, nearly five months after that crash in which 5-year-old Jenson Reynolds and his grandfather Jerry “Jake” Michaels died.

In addition to prison time, Bare will have her driver’s license suspended for a total of 26 years.

It comes after Bare pleaded guilty in September to all counts stemming from the deadly crash — including two counts each of reckless homicide, causing death when operating a motor vehicle intoxicated, causing serious bodily injury when operating while intoxicated and one count of resisting law enforcement.

When weighting Bare’s sentence, a judge found that there were several aggravating factors in the case, including the following:

According to a probable cause affidavit, Bare crashed into a Montpelier home with about eight people sitting on the front porch on June 6.

After the crash, Bare was seen crying and saying she “did not mean to do it,” according to the affidavit.

Bare was then placed in a police vehicle and got out, having managed to slip a handcuff off her left wrist. An officer later caught up to her and she fell to the ground crying, saying “she could not do this,” according to the affidavit.

Two other members of the family were flown to a hospital to be treated for their injuries.

This story was originally published Nov. 7, 2022 by WRTV in Indianapolis, an E.W. Scripps Company.