SAN DIEGO (KGTV) – A murder charge against 75-year-old Jane Dorotik was dismissed this week as she was getting ready for a second trial.

Dorotik was originally convicted of murdering her husband, Robert, back in 2001. He was found bludgeoned and strangled a year earlier near their Valley Center home.

Prosecutors alleged the tire tracks near the scene matched those of the family truck, and that Dorotik killed her husband and dumped his body, then later reported him missing. 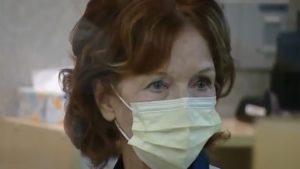 “Everyone says well you’re innocent until proven guilty, and that’s not actually true, once you’re accused you’re assumed to be guilty, and every possible shred of any kind of speculation is brought in to try and support that,” said Dorotik in an interview Tuesday. “I spent more than 20 years behind bars, and you know, I guess I also learned how much is wrong with the prison system.”

In 2020, a judge overturned that original conviction after new evidence came to light, however, shortly after that a new jury trial was granted. A lengthy preliminary hearing found enough evidence to move forward.

That trial was set to begin this week, but prosecutors filed a motion to dismiss the case. A judge granted that motion.

“It’s discouraging that it’s taken this long, and it’s discouraging that in some way, we have not had an opportunity to put on all of our evidence which is absolutely overwhelming and the prosecution has had for quite a while. So why did it take this long?” said Dorotik. “The ultimate takeaway is it’s a huge relief, and a continued belief that there is something very wrong with this criminal justice system that needs to be fixed.”

The San Diego County District Attorney’s office issued the following statement in response to the dismissal of the case:

“This case has a long history where a jury convicted the defendant of murdering her husband. The case started over after a judge granted a new trial. After a preliminary hearing, a judge found probable cause that the defendant murdered her husband, Robert Dorotik, and the case was set for jury trial. The District Attorney’s Office is ethically bound to only proceed with trial if we believe the admissible evidence is sufficient to convince all twelve jurors that the defendant is guilty beyond a reasonable doubt. After litigating the pre-trial motions in a fair and complete hearing and reviewing the court’s subsequent rulings on admissible evidence and in particular the elimination of key tire track evidence, we have concluded we can no longer ethically proceed with the prosecution of this defendant because the evidence is now insufficient to prove guilt beyond a reasonable doubt. In every criminal case we file, our office remains committed to pursuing fair and equal prosecution and delivering justice for crime victims.”

Paula Mitchell, the legal director of the Loyola Law School Project for the Innocent said she began looking into Dorotik’s case in 2015. She said soon after, DNA testing revealed new evidence, including another person’s DNA found under Robert Dorotik’s fingernails.

“He was obviously the victim of a violent assault. So we just started looking very, very closely at the forensic evidence that was presented against her at trial, and it was just incredible how poorly it was done, how poorly it was documented, how the crime scene examiners weren’t wearing drugs, they weren’t even competent to be doing that type of work,” said Mitchell. “The more we dug, the more we found. We found eyewitnesses that saw her husband jogging on that Sunday and the prosecution told the jury he was killed on Saturday. It was small things and big things but everything pointed to her innocence. What was upsetting really is that it took this long, that testing was done in 2016.”

Mitchell said they provided the DA’s office with their findings.

“It’s really important to be open to examining old convictions to see if a mistake was made, and when an innocence project like ours comes knocking and says, ‘hey we’ve done 6 years of investigation, please look at all of the evidence we’ve uncovered that supports our clients claim of innocence’ you should take us seriously, you should sit down and worth with us to go over all that evidence before you decide you should embark on this incredibly stressful retrial for a woman who is 75-years-old and already spent 20 years in prison, but they didn’t do that,” said Mitchell.

Mitchell said almost a month before Robert Dorotik was killed, a couple was attacked nearby. While unknown if the attacker was involved in Dorotik’s case, she believes that person was not thoroughly investigated.

“There was an individual who attacked a couple violently, unprovoked, on January 15, almost exactly a month before Robert Dorotik was killed, very, very nearby along the same stretch of road. They never interviewed that person, he went on to attack two more people, again somebody in March, somebody in April. We brought this to their attention years ago. We’ve given them all of the information we were able to collect in our investigation, that we believe should have been investigated then and should be investigated now. What they do with that information, I have no idea,” said Mitchell, who did not provide the name of that person because she wanted to be mindful so he’s not falsely accused.

As Dorotik begins her new journey, she hopes to spend time with loved ones and continue fighting for those trying to prove their innocence.

“What’s on my mind is going to visit my daughter in Florida, continuing the work throughout the prison system, I did a lot of advocacy work and became a member of the California Coalition of Women Prisoners and it just seems more important than ever to continue that work, so that’s really what I want to do,” said Dorotik.

This story was originally published May 17 by KGTV in San Diego, an E.W. Scripps Company.