Two men accused of crafting a plan to kidnap Michigan Gov. Gretchen Whitmer in 2020 and ignite a national rebellion are facing a second trial this week, months after a jury couldn’t reach a verdict on the pair while acquitting two others.

The result in April was a blow to federal prosecutors, who had set out to show that extremists were committed to snatching Whitmer and causing chaos close to the election between Joe Biden and then-President Donald Trump. 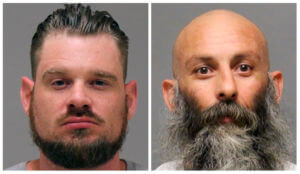 The trial of Adam Fox and Barry Croft Jr. means another public airing of secretly recorded conversations, text messages and chilling social media posts. It also comes at a time of intense news coverage of the U.S. House committee investigating the Jan. 6, 2021, riot by Trump supporters at the Capitol.

Jurors will see how undercover FBI agents and informants had infiltrated the Michigan group. In response, defense attorneys again will argue that Fox and Croft were shielded by the First Amendment when they expressed malicious opinions about government and were entrapped every step of the way.

“The stakes are higher because the government has doubled down,” Matthew Schneider, a former U.S. attorney in Detroit, said of the second trial. “They’re going to try this all over again, and the government’s view is, ‘We’re going to prevail.’”

Also in the background: Whitmer’s reelection campaign for a second term is heating up. Jury selection starts Tuesday in federal court in Grand Rapids, Michigan.

“This is like deja vu all over again,” U.S. District Judge Robert Jonker said.

The government alleges that Fox, who was living under a Grand Rapids-area vacuum shop, and Croft, a trucker from Bear, Delaware, wanted to target Whitmer as well as other public officials over their tough restrictions during the early months of the COVID-19 pandemic.

A handmade “shoot house” was erected for weekend gun drills. There is evidence that Croft, Fox and undercover operatives took a night ride to northern Michigan to check Whitmer’s second home and discuss putting an explosive under a bridge. Two men who pleaded guilty will testify again for prosecutors.

“I’m gonna hit soon,” Croft was heard saying during a June 2020 meeting of anti-government activists in Ohio. “I’m going to terrorize people. The right people. The people who have been terrorizing my people.”

Fox and Croft are charged with conspiracy. The first trial ended in a mistrial when the jury couldn’t reach a unanimous verdict against them. The jury, however, acquitted Daniel Harris and Brandon Caserta. 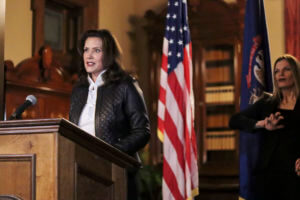 Caserta’s attorney, Michael Hills, said the second trial will be “shorter and more focused” with two people instead of four.

“Defending a second time is always difficult for the defense,” Hills said. “They’ve got everything against them, the power of the government.”

The judge said he won’t mention the result of the first trial during jury selection. But if prospective jurors say they’re aware of it, Jonker will ask if it would affect their ability to be fair and impartial.

The “jury really needs to understand its decision needs to be based on the evidence in this case, not what happened in some other case,” Jonker told the lawyers.

Whitmer, a Democrat, said little publicly after the first trial but opened up to The Washington Post during a recent interview.

“Does anyone think these kidnappers wanted to keep me or ransom me?” Whitmer said. “No. They were going to put me on trial and then execute me. It was an assassination plot, but no one talks about it that way. Even the way people talk about it has muted the seriousness of it.”

White reported from Detroit. Joey Cappelletti in Lansing, Michigan, a corps member for the Associated Press/Report for America Statehouse News Initiative, contributed to this story.