Two Indianapolis women, mainly working with each other and their mothers’ intuitions, rescued five-month-old Kason Thomas, the missing twin baby who was abducted Dec. 19 in Columbus. 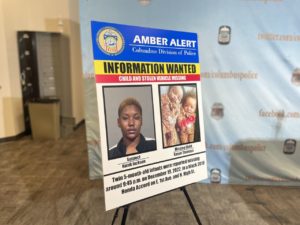 The story began when Shyann Delmar bought toys from a woman going by the name “Mae,” on Tuesday. She then gave Mae a ride to a dollar store, but her passenger’s behavior was strange, according to Delmar. So strange that she took a video of her.

The pair swapped phone numbers, but she couldn’t get Mae out of her head. It wasn’t until the next day when Delmar saw the news that she jumped into action.

“I was scrolling on Facebook and saw a mugshot, of this girl with… blonde hair,” Shyann Delmar said. “And I’m like… she looks familiar.”

The mom first called her grandmother.

“I’m like, ‘grandmother, the lady I told you I seen at the gas station and I bought some stuff from — I think this is the same lady, that stole these kids,” she said.

It is possible that people could look the same, her grandmother told her. She kept digging.

Delmar asked her cousin, Mecka Curry, if Mae could be the kidnapping suspect, Nalah Jackson, and Curry got a bad feeling. She knew she had to join the search, she said.

It was the morning of Dec. 22, which can be shown as 12/22/22, an angel number, meaning it is spiritual and has good luck attached to it, according to Curry.

“Now, they said it was gonna be a miracle and best believe it was a miracle,” the cousin said.

The pair say they set up a plan to get Jackson in their vehicle, working with police to pull them over so they could arrest her.

This plan was extremely difficult to accomplish due to Indianapolis Metropolitan Police Department not believing them or taking them seriously, the woman said. The pair consistently rotated between Columbus Police, who were listening to them but telling them to call IMPD, and IMPD who either didn’t answer or didn’t believe them, they added.

They had been talking to the family during this time, as well.

“Mae” had called and asked Delmar if she wanted to buy more toys, and the mothers used that to get her in the car.

Once in the car, both women knew 100% that this was Jackson, they said.

“The confirmation was just too crazy,” Curry said.

While in the car, the pair started asking Jackson questions, making sure to not “throw her off” that she was being set up, they said.

Once pulled over, the pair livestreamed the traffic stop.

Their plan worked. Jackson was taken into custody Thursday by Indianapolis police. But their work wasn’t done, since Kason was still missing. They needed to find the car.

“The bus ticket was our number one lead,” Curry said. The pair say they searched every spot where the bus stopped. And then they found the Honda.

The next few minutes were a blur: Screaming, running, calling and flagging down police.

Columbus police confirmed both women were involved in the arrest of Jackson and the recovery of Kason, but they aren’t able to go into further detail, a spokesperson said. The Indianapolis police thanked the moms and the power of the internet.

“Social media can be a positive tool to help spread information like this, and it just helps us to effectively solve cases,” IMPD Sgt. Shawn Anderson said.

The family is forever thankful for the work of these two sleuths. In an interview with News 5 on Friday, the baby’s grandmother LaFonda Thomas gave a message to them.

“Mecka and Shyy — I appreciate you, my family appreciates you,” Thomas said. “What you guys did, it took courage.”

After the weekend in the hospital, Kason was able to come home Monday, Thomas said.

Jackson is set to have her first appearance in court Tuesday afternoon. She has been charged with two counts of felony kidnapping.

This story was originally published Dec. 27 by WEWS in Cleveland, an E.W. Scripps Company.