Two more witnesses took the stand Thursday in the murder trial of Paul and Ruben Flores, who are charged in connection with the 1996 disappearance of Cal Poly freshman Kristin Smart. 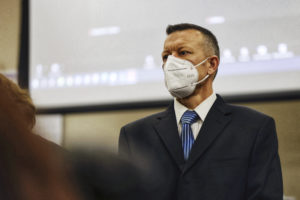 Paul Flores stands during his murder trial in Monterey County Superior Court in Salinas, Calif., Monday, July 18, 2022. Flores is accused of the murder of Kristin Smart. Smart is still missing, but the man last seen with her at California Polytechnic State University in San Luis Obispo in 1996 is on trial more than a year after he was arrested on a murder charge along with his father, who is accused of helping hide her body. (Daniel Dreifuss/Monterey County Weekly via AP, Pool)

Mario Garcia, a pool-playing acquaintance of Paul Flores, and Felipe Arias, an acquaintance of Kristin Smart, were questioned in front of a courtroom full of jurors and the Smart family.

Garcia, a 26-year-old junior at Cal Poly in 1996, was first on the witness stand Thursday.

He said he played pool with Paul in Paul’s dorm from time to time during the final quarter of that school year and testified that he saw Paul the week after Kristin’s disappearance.

Garcia told San Luis Obispo County Deputy District Attorney Christopher Peuvrelle in court that he noticed Paul had a black eye and that he was acting in a nervous, edgy way.

Garcia said that Paul had a hat on and was wearing it lower than one would normally wear a hat when he saw him that next week.

Paul’s attorney, Robert Sanger, then questioned Garcia on whether Paul regularly wore a hat. Garcia replied that he did not recall.

Sanger also asked Garcia if Paul was “generally a nice guy” when they hung out, and Garcia replied that he was. 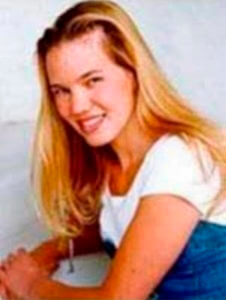 Next on the stand was Felipe Arias, a freshman at Cal Poly living in the Trinity dorms and an acquaintance of Kristin Smart during the 1995-96 school year.

Arias said he met Kristin Smart at a fraternity party and on two occasions, she stayed with him in his dorm room in the months leading up to her disappearance.

During one of the stays, Arias said Smart left a CD and sandals.

Sanger said Arias had told investigators during a July 1996 interview that Smart had stayed with him five or six times, either in his bed or on the couch. Arias replied that she had twice stayed in his bed and could have stayed on the couch on a few other occasions.

Both witnesses, who are Cal Poly graduates, were excused for the day but are subject to being recalled for further questioning.

Monterey County Judge Jennifer O’Keefe heard a motion Thursday afternoon from several media organizations to unseal case documents, including the protective order prohibiting anyone involved in the trial from speaking with media about the case.

O’Keefe said counsel will supply the court with the names in the documents that each side would like sealed. She said a full seal could also be done for certain documents.

The protective order issued in the case is still in effect, but O’Keefe said it will be reviewed to be consistent with the law.

In the meantime, the court is continuing to unseal documents in the case.

Wednesday, hundreds of pages of documents dating back to shortly after Kristin’s disappearance were released.

Court will not be in session Friday but will return for more proceedings on Monday morning.