DENVER (AP) — Cattle rancher Jeffery Gatzke in South Dakota was listening in as he worked on his tractor in his workshop. The first public hearings on impeaching President Donald Trump are political show, he thinks, but he wanted to follow along anyway. 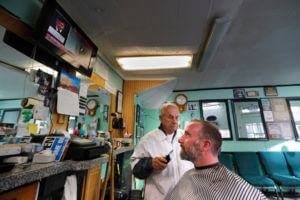 Seth Morrill glances up at a TV monitor televising the impeachment hearings while getting his hair cut, Wednesday, Nov. 13, 2019, in Portland, Maine. Morrill said the hearings are very important but he would not intentionally carve time out of his day to watch them, saying he would catch up on the news later, via the internet. (AP Photo/Robert F. Bukaty)

Tech manager Adam Cutler arranged to work from his Denver home so he could witness live the moment he hopes will expedite the end of the Trump presidency.

Mary Tabor, a 20-year-old math major at the University of Cincinnati, studied at the library rather than watching live, figuring she’d get the summary from comedian Seth Myers’ late-night show.

“I know some people are really into it and others just don’t pay much attention,” said Tabor, a supporter of Democratic presidential hopeful Sen. Elizabeth Warren. “It’s hard to understand if you’re not in that world.”

Across the country, the first public airing of the impeachment drama had millions of Americans tuning in — and, in some cases, deliberately tuning out. Although only the third time impeachment hearings were aired live on television, the proceedings in Washington were landing on a jaded and weary public, with little certainty that the event would change minds.

In many cases, “watch” isn’t quite the right verb. Americans were consuming these hearings in ways unimaginable during the last impeachment hearings more than 20 years ago. They were scanning headlines on Twitter, reading posts on social media and would click on snippets of video pushed out online in real time. For many, the historic event was simply background noise.

“Oh, is that today?” said 63-year-old Randy Johnson, a semi-retired Tennessee man, as he cast a fishing line into the gulf in St. Pete Beach, Florida.

Like in previous nationally-televised hearings in the Trump-era — including special counsel Robert Mueller’s testimony about his investigation into Russian interference in the 2016 election, or the confirmation hearing of U.S. Supreme Court Justice Brett Kavanaugh — Wednesday’s hearing marks Democrats’ latest hope in breaking the partisan stalemate that has dominated politics this decade.

Democrats were hoping, if not for a national epiphany, then at least a day that would stand out from the partisan acrimony and circus-like atmosphere of Trump-era Washington.

“I don’t want to say it will be the tipping point, but I think it will be the beginning of a week or two where it will be very difficult for the president to change the subject,” said Cutler, the Denver Democrat who watched from home.

Cutler supports Democrats’ push to impeach the president for soliciting a political favor from the president of Ukraine and, they claim, threatening to hold up millions in aid as leverage. Polls show he’s joined by nearly half of Americans, although the partisan divide on the question is striking and consistent in the weeks leading up the hearings.

For Gatzke, a 50-year-old farmer and rancher from Hitchcock, South Dakota, the Ukraine affair was just the Washington establishment’s latest attempt to thwart an outsider president.

“He is not one of them and they don’t like it,” he said, just before the hearings began. Gatzke caught as much as he could during his morning chores on the farm. He had to break to load up cattle for the processing plant. His wife, Sheila Gatzke, watched, too, and fumed about what she claimed was testimony based on “hearsay,” a defense Trump once pushed.

Christian Jacobs, 50, sat in a bar on the beach in St. Petersburg, Florida, wearing a fedora and reluctantly watching the drama on television.

“I did not want this,” he said, glancing at the TV with and sipping in a breath from his marijuana vape pen. A Democrat, he had initially balked at impeachment but has come around to it as details trickled out about Trump’s behavior with Ukraine.

“I’m so afraid, left to his own devices, what else he may do,” Jacobs said of Trump.

While Democrats control the House of Representatives and likely have the votes to impeach Trump, they would need about 20 Republican senators to vote to convict him of high crimes and misdemeanors before he would be removed from office.

The U.S. diplomats who testified Wednesday weren’t expected to offer new blockbuster evidence that would change the dynamic. Their statements had already been offered to the committee and many of the details were public already.

That took some of the air out of the event, noted Pilar Esperon, as she waited for a train in Boston’s South Station. A nearby television was turned to the hearing, but few patrons watched it closely.

Esperon, who works in real estate in New York City, was scrolling through the news coverage on her cellphone. She said she already believes Trump committed an impeachable offense.

“Presumably most of these witnesses will say what they said in their written testimony,” she said. “So all you’ll get is a lot of posturing by a lot of people in front of the camera. I don’t think anything will really move the needle.”

Still, Democrats hoped the televised questioning might produce a moment that would capture the heart of the complicated case and, perhaps, even go viral.

The goal was a trajectory that might mirror 1973, when the nationally-televised Watergate hearings helped hammer down President Richard Nixon’s approval rating from about 50% to a low of 24% before his 1974 resignation from office.

Live witness testimony during the impeachment investigation into President Bill Clinton did little to shift public opinion, said GOP pollster Whit Ayers. Clinton was impeached, but the Senate would not remove him from the White House amid his sky-high approval ratings.

“The more likely outcome is that it will make red states redder and blue states bluer,” Ayres said of the Trump impeachment hearings.

America certainly watched with a wary eye and a sense of exhaustion, even among Democrats, after nearly three years of nonstop Trump drama.

At the Holmes II barbershop in Savannah, Georgia, the live impeachment broadcast was showing Wednesday on three TVs. Barbers and their customers barely seemed to look up as they talked about NFL football and the best phone apps for paying bills.

Anthony Harris, who has cut hair at the shop since it opened in 1994 and bought the place four years ago, said the impeachment drama has only worsened his sense of Trump fatigue. He’s not surprised others are tuning it out.

“It’s kind of monotonous. He’s on the news every day, all day, for all kinds of things,” said Harris, a 56-year-old independent who leans Democratic. “It’s gotten to the point now where people are even tired of listening.” 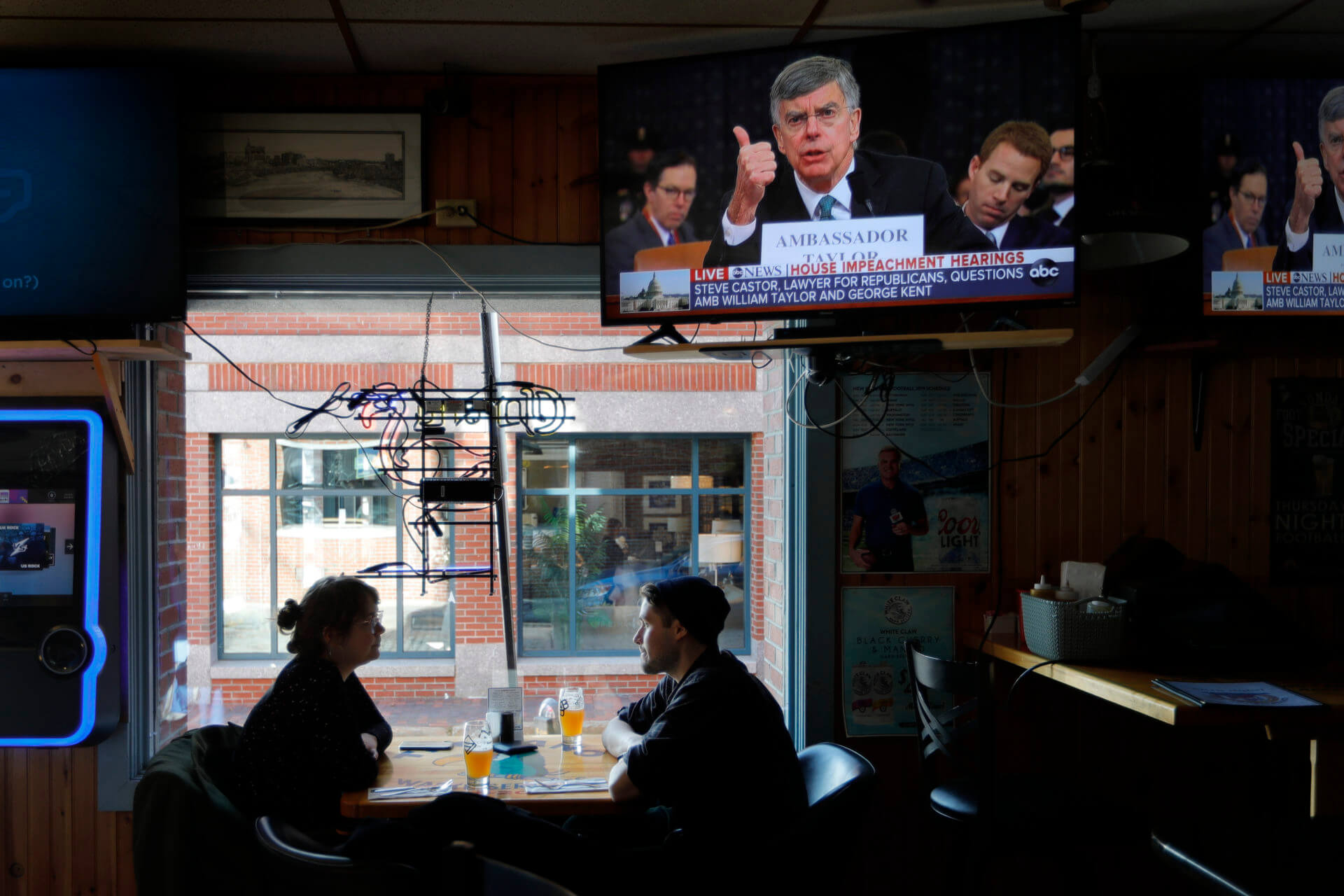 Olivia Tobin and her fiancé, Jordan Ashby, ignore the televised impeachment hearings playing on monitors at the Commercial Street Pub, Wednesday, Nov. 13, 2019, in Portland, Maine. Tobin is an Irish citizen who has a green card to live and work in the U.S. and said she only pays attention to the hearings if it seems likely that the Trump will be held accountable. (AP Photo/Robert F. Bukaty)
MORE NEWS