LAS VEGAS (KTNV) — Margaret Rudin, who was convicted of murdering her husband, has had her conviction vacated. 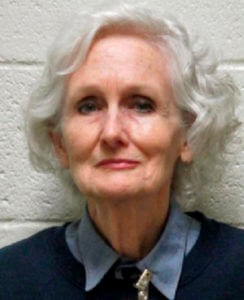 FILE – This undated photo provided by the Nevada Department of Corrections shows Las Vegas socialite Margaret Rudin. A judge on Sunday, May 15, 2022, vacated Rudin’s murder conviction after she spent 20 years in prison for the 1994 killing of her millionaire husband before being paroled. Margaret Rudin was found guilty in 2001 of murder in the death of real estate mogul Ron Rudin. (Nevada Department of Corrections via AP, File)

The so-called “Black Widow of Las Vegas” was released from prison in 2019 and, at last report, was living with her family in Illinois. She appealed her conviction of first-degree murder on the grounds that her initial defense counsel was ineffective and plagued by conflicts of interest.

In a 68-page ruling on Sunday, Nevada’s district court justices concluded that Rudin’s Sept. 17, 2001 murder conviction should be vacated. Mullanax clarified that the ruling is not a determination of Rudin’s guilt or innocence in Ron Rudin’s murder, but a determination that her conviction no longer stands.

Rudin’s millionaire husband Ron was murdered in 1994. Police said he was shot in his sleep, and his burned body was later found in the Nevada desert.

She was indicted in 1997 and went on the run, disguising herself and assuming different identities. She was eventually tracked down and arrested in October of 1999 in Massachusetts, and brought back to Nevada to stand trial in the murder case.

Questions about the effectiveness of Rudin’s defense, led by now-deceased attorney Michael J. Amador, began from the moment of opening statements in her trial. At one point, Rudin herself spoke up and addressed the judge: “Your honor, I would like a mistrial,” she said.

The court’s ruling contains allegations that Amador was unprepared for the trial, and that he “lied to the court because he had book and movie contracts regarding the Rudin case.”

Rudin was ultimately convicted and sentenced to serve two life sentences in prison, with the possibility of parole on each sentence after 10 years. She served 20 years before she was paroled in 2019. She has maintained her innocence.

Now, prosecutors have 30 days to file a motion to appeal the court’s ruling or to retry the case. If not, Rudin must be released from all custody or restraints, including probation or parole. If the state decides to retry Rudin, jury selection must begin within 120 days, according to the ruling.

This story was originally published May 17 by KTNV in Las Vegas, an E.W. Scripps Company.