DALLAS (AP) — Texas’ Republican governor and top law enforcement officer on Wednesday came to the defense of a Dallas hair salon owner who was jailed for keeping her business open in defiance of the governor’s restrictions meant to slow the spread of the coronavirus.

Shelley Luther was booked in the Dallas County jail on Tuesday following a video hearing during which she refused to apologize for repeatedly flouting the order, leading the judge to find her in contempt of court and sentence her to a week behind bars.

Luther was cited last month for keeping her salon open despite state and local directives that kept nonessential businesses closed, but she continued to defy the order and tore up a cease and desist letter in front of TV cameras.

“I couldn’t feed my family, and my stylists couldn’t feed their families,” Luther testified Tuesday, saying she had applied for a federal loan but didn’t receive it until Sunday.

Dallas County Judge Eric Moye said during the hearing that he would consider levying a fine instead of jail time if Luther would apologize and not reopen until she was allowed to do so, but Luther refused.

“Feeding my kids is not selfish,” she told Moye. “If you think the law is more important than kids getting fed, then please go ahead with your decision, but I am not going to shut the salon.”

Moye wrote in his judgment of contempt: “The defiance of the court’s order was open, flagrant and intentional.” He noted that despite being given the opportunity to apologize, Luther “expressed no contrition, remorse or regret” for her actions.

Annette Norred, a paralegal with the law firm representing Luther, said they are preparing a court filing seeking her release. Luther isn’t sure which program gave her the loan or how she’s allowed to spend it, Norred said.

Texas Attorney General Ken Paxton sent a letter to the judge Wednesday asking him to release Luther from jail. U.S. Senator Ted Cruz also expressed support for her. Both are Republicans. 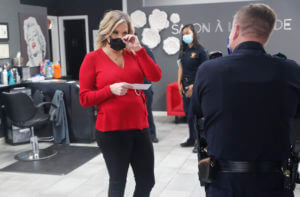 Salon owner Shelley Luther holds a citation and speaks with a Dallas police officer after she was cited for reopening her Salon A la Mode in Dallas, Friday, April 24, 2020. Hair salons have not been cleared for reopening in Texas. Luther was asked by officials to close and was issued a citation when she refused. Luther said she will remain open for business. (AP Photo/LM Otero)

“I find it outrageous and out of touch that during this national pandemic, a judge, in a county that actually released hardened criminals for fear of contracting COVID-19, would jail a mother for operating her hair salon in an attempt to put food on her family’s table,” Paxton said.

“Compliance with executive orders during this pandemic is important to ensure public safety; however, surely there are less restrictive means to achieving that goal than jailing a Texas mother,” Abbott said in a statement.

In response, a letter to Paxton signed by Moye and the 11 other Dallas County civil district court judges called the attorney general’s letter to a judge about a pending case an improper communication under the Texas Code of Judicial Conduct. The judges told Paxton they “trust this shall not happen further.”

The governor coming to the defense of someone violating his own executive order reflects the increasing pressure he faces to reboot the state at a much faster pace.

As Luther appeared in court Tuesday, Abbott gave permission for hair salons and barbershops in Texas to reopen by Friday, accelerating his own timeline.

Although Abbott last week allowed restaurants and retailers to reopen with limited capacity, he said at the time that mid-May was his goal to get hair salons and gyms up and running.

But some Texans haven’t been willing to wait, including two GOP state lawmakers who let reporters film them getting haircuts outside Houston on Tuesday.

Mark Jones, a professor of political science at Rice University, said Abbott has to balance opening up too slowly and alienating the right wing of his party, and moving too quickly in a way that risks a resurgence of COVID-19 and the loss of moderate Republicans and swing voters.

“Gov. Abbott has been forced to follow a very narrow path,” Jones said.

State Rep. Chris Turner, who chairs the House Democratic Caucus, compared Luther’s case to that of a woman who was sentenced in 2018 to five years in prison for casting a provisional ballot in the 2016 presidential election while on probation.

“To all who are distraught overproud lawbreaker Shelley Luther getting 7 days in jail, I’d like to introduce you to Crystal Mason,” Turner wrote on Twitter.