COLUMBUS, Ga. (AP) — The defense attorney for a Georgia woman charged in her husband’s fatal shooting says he plans to argue she was a victim of domestic violence, who shot the man in self-defense.

Charise Douglas, 31, was charged with murder and using a gun to commit a crime in the May 1 killing of John Anthony Johnson, 38, her husband of one month, news outlets have reported. 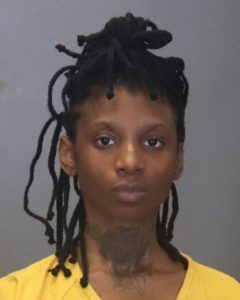 This undated booking photo provided by the Muscogee County Jail shows Charise Douglas, who is accused of killing her husband of one-month. Her defense attorney says Douglas was escaping a domestic violence situation. (Muscogee County Jail)

Attorney Anthony Johnson, no relation to the victim, said Thursday outside of a Columbus courtroom that he intends to argue Douglas shot her husband to protect herself and her 6-year-old son as she was attempting to escape the home and physical abuse, according to the Columbus Ledger-Enquirer.

The attorney is expected to make the case that Douglas’ actions were justified under a Georgia law allowing people to use deadly force in self-defense situations.

“He almost choked her to death,” the attorney told reporters Thursday. “She was getting ready to leave the home, so she had already packed.”

He added that Douglas was wearing her purse, which had a handgun in it, and she pulled the gun from the bag and shot Johnson.

Police discovered Johnson suffering from a fatal gunshot wound in the street while responding to reports of a person on the ground. He was pronounced dead at the scene and Douglas was later taken into custody.

She was held in jail without bond Thursday while awaiting a preliminary hearing.