MAGNOLIA, Del. (WMAR) — A Delaware couple has been arrested and charged with leaving their 5-year-old baby girl — whose birth was never reported — to die at their home.

Police said Angel Toran, 22, and her fiancé Ny’jier Murphy, 24, had a baby at their Magnolia, Delaware home in April 2021, and her birth was never reported. 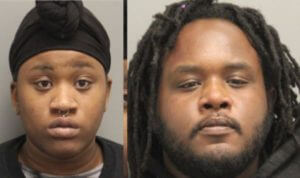 The baby died at 5 months old from medical issues resulting from severe malnourishment, investigators determined. Her death was never reported to the state, and the baby was buried on the property, according to a press release.

The infant’s body was exhumed on Oct. 11, 2021, after police initially responded to the couple’s mobile home Oct. 10. Murphy was seen with a Glock 19-model 9mm handgun on his hip, which he did not have a permit for carrying, police said.

Toran and Murphy were arrested Feb. 10 — Murphy allegedly after a brief struggle. Toran was arrested without incident. Both are set to be charged with murder by abuse/neglect and related offenses.

This story was originally published Feb. 16, 2022, by WMAR in Baltimore, an E.W. Scripps Company.