A former police chief has been convicted of raping a child and related offenses in abuse the victim said began when she was about 4 years old and occurred hundreds of times over the following seven years.

The case in northeastern Pennsylvania’s Carbon County against former Weissport Police Chief Brent Robert Getz, 30, and a friend of his languished for several years after police first learned of the allegations. 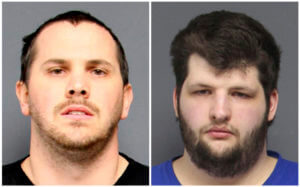 FILE – This combination of undated booking photos provided by the Pennsylvania Attorney General’s Office shows, Brent Getz, left, and Gregory Wagner Jr. On Thursday, March 10, 2022, Getz, a former police chief, was jailed after a jury convicted him of raping a child and related offenses in a case that languished for several years after police first learned of the allegations. Codefendant Wagner Jr. pleaded guilty to child rape in November 2020 and agreed to testify against Getz. Both men await sentencing. (Pennsylvania Attorney General’s Office via AP, File)

After his 2019 arrest, Getz was fired from his job as police chief in Weissport, a town of some 400 residents 77 miles (124 kilometers) northwest of Philadelphia. A message seeking comment was left for his lawyer, Brian J. Collins.

Codefendant Gregory E. Wagner Jr., 31, pleaded guilty to child rape in November 2020 and agreed to testify against Getz. Both men, who were adolescents when the abuse began, await sentencing.

According to Getz’s 2019 arrest affidavit, the victim told a substitute teacher at her elementary school in early 2012, when she was 11, that Wagner had raped her.

The Carbon County child welfare agency became involved, and the victim was interviewed by a child advocacy center in Scranton. A nurse concluded the child’s symptoms and accounts were consistent with sexual abuse.

Leslie Slingsby, executive director of Mission Kids Child Advocacy Center in East Norriton, an organization that helps respond when child abuse allegation are made, said the victim “went through more than she or he ever needed to, absolutely.”

“These are cases that are heartbreaking because it has taken this child so long to get justice as well as for this child to ensure they were safe, for children in the community to be safe,” Slingsby said.

Pennsylvania enacted drastic changes in handling of child sexual abuse cases in the wake of the Jerry Sandusky child molestation scandal, Slingsby said, “but it seems like this should have certainly been resolved before that.”

A Franklin Township police officer spoke with Wagner in May 2012, but Wagner stopped the interview after a few minutes and obtained a lawyer, according to the affidavit.

More than a year later, in June 2013, the same officer again questioned Wagner, this time with his lawyer present, the affidavit said. Wagner denied allegations and no charges were filed.

The victim recorded a brief cellphone video of Wagner having her watch pornography “a few months after the initial complaint was made against Wagner, because nobody believed her and she wanted to show people proof,” Sean McGlinn, an agent with the Pennsylvania attorney general’s office, wrote in Getz’s arrest affidavit.

Three years later, in 2015, a criminal complaint was prepared against Wagner but was dismissed by a district judge because of what the attorney general’s office has described as a paperwork error.

A Franklin Township officer “revisited” the case in 2018, at which time the victim revealed that Getz, a friend of Wagner’s, also had sexually assaulted her, the attorney general’s office has said.

She said both men had sexually assaulted her hundreds of times, several times a week for about seven years, according to the arrest affidavit.

In September 2018, the Carbon County district attorney’s office referred the matter to the attorney general’s office regarding Getz, and in January 2019 regarding Wagner, according to the charging affidavit. Wagner confessed in March 2019 to sexual assault of the child and implicated Getz.