WASHINGTON (AP) — The Supreme Court on Friday allowed a Texas law that bans most abortions to remain in effect for now. But in an unusual move the justices said they want to hear arguments in the case at the soonest opportunity.

Those arguments at the high court on Nov. 1 will help the justices decide whether the law, the most restrictive abortion law in the nation, should be blocked while legal challenges continue. 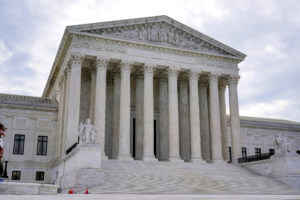 The Supreme Court is seen on the first day of the new term, in Washington, Monday, Oct. 4, 2021. (AP Photo/J. Scott Applewhite)

The law, known as Senate Bill 8, has been the subject of a series of legal challenges since before it went into effect in September, and it made one previous trip to the high court. Except for a brief window when a lower court judge blocked it, however, it has remained in place. That has meant that most women in Texas seeking abortions have been unable to get them unless they travel out of state.

Here are some questions and answers about the law, its path through the courts and what happens next.

WHAT EXACTLY IS THE SUPREME COURT DECIDING?

The challenges to Texas’ law now before the Supreme Court were brought by abortion providers and the Biden administration.

Texas law prohibits abortions once medical professionals can detect cardiac activity — usually around six weeks, before some women know they’re pregnant. That conflicts with Supreme Court precedent, which says states are prohibited from banning abortion before viability, the point at which a fetus can survive outside the womb, around 24 weeks of pregnancy.

The Supreme Court could reconsider those precedents in a case it’s hearing in December, but it hasn’t yet.

As far as the Texas law goes, the way it is written has so far made it unusually difficult to challenge in courts. The question the justices are considering is whether the Justice Department and abortion providers can challenge the law in federal court. Even if the justices decide that either or both can sue, they still must vote on whether to allow the law to remain in effect while the legal challenges continue.

WHAT IS UNUSUAL ABOUT THE SUPREME COURT’S ACTION FRIDAY?

The court is moving at a really rapid pace. Normally there are months between when the court agrees to hear a case and arguments in a courtroom. This time the court has put the parties on an extraordinarily compressed time table to file briefs and prepare for arguments in a little over a week. That suggests the justices plan to make a decision quickly.

In addition, usually the high court only agrees to hear arguments in cases where lower federal courts have decided an issue in conflicting ways. That’s not the case here.

HOW IS TEXAS’ LAW UNUSUAL?

The law differs from similar efforts to restrict abortions in other states by leaving enforcement to private citizens, who can sue doctors or anyone who helps a woman get an abortion. That unique enforcement mechanism has frustrated efforts to challenge it. Usually the state would enforce the law and suing state officials would be the appropriate legal avenue.

THE CASE HAS ALREADY BEEN TO THE SUPREME COURT ONCE?

Yes. Abortion providers brought their challenge before the law went into effect and sought to have the Supreme Court step in to stop it. The court declined in a 5-4 ruling. The justices in the majority said “serious questions” had been raised about the law. But they cited a host of issues, including the law’s novel enforcement mechanism and the fact that no one had yet actually attempted to sue someone under the law for helping a woman get an abortion, as among the reasons they declined to intervene. The majority stressed it was not making any conclusions about the constitutionality of the law.

The four justices who would have blocked the law in the first place all have raised questions about its unusual structure. It’s not clear if one or more of the conservatives who initially voted to let the law take effect will be persuaded by the administration’s arguments and now vote to halt the law’s enforcement.

WHAT HAS BEEN THE IMPACT OF THE LAW IN TEXAS?

Since the law took effect in early September, providers say 80% or more of abortions previously provided in the state are now prohibited. Texas women have sought out abortion clinics in neighboring states, some driving hours through the middle of the night and including patients as young as 12 years old. The law makes no exception in cases of rape or incest.