LANCASTER, Calif. (AP) — Four children, including an infant, and their grandmother were found shot to death in a Southern California home and the children’s father was arrested on suspicion of killing them, the Los Angeles County Sheriff’s Department said.

The victims were found Sunday night in a home in the city of Lancaster in the high desert Antelope Valley north of Los Angeles.

The children’s mother discovered the bodies and called 911, Lt. Brandon Dean told The Associated Press in a telephone interview.

Three houses away, Grace Beltran and her son Gerard were awakened by first responders’ flashing lights. Grace Beltran said a woman was running back and forth in their front yard, screaming, “My babies are gone! They’re all dead!” 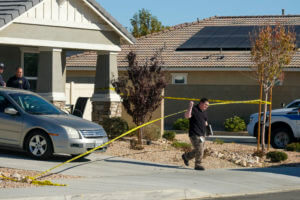 A law enforcement leaves a home where five bodies were found in the city of Lancaster in the high desert Antelope Valley north of Los Angeles, Monday, Nov. 29, 2021. A Los Angeles County Sheriff’s Department statement says deputies found a woman, a girl and three boys with gunshot wounds and paramedics pronounced them dead at the scene. The department says the children’s father showed up at the Lancaster sheriff’s station and was arrested on suspicion of five murders after being interviewed by detectives. (AP Photo/Ringo H.W. Chiu)

Within a few minutes of the mother arriving home, the children’s father, Germarcus David, 29, turned himself in to deputies at the Lancaster sheriff’s station, Dean said.

David was arrested after being interviewed by investigators and was held in lieu of $2 million bail.

It was not immediately known if David had a lawyer who could speak on his behalf. He was expected to make an initial appearance at the Antelope Valley Courthouse on Tuesday.

The grandmother, a girl and three boys suffered gunshot wounds to the upper torso and paramedics pronounced all of the victims dead at the scene. Authorities did not identify them but Waki Jones, who worked with the family through his Lancaster daycare service, told the Los Angeles Times that the two eldest children were Amaya, 12, and Demarcus, 9.

“Amaya was a sweet girl, and every morning, the mom would tell her, ‘Say good morning to coach,’” Jones said, meaning himself. “She was always protecting her brother, making sure he was safe at school.”

To do this to the kids, it’s cowardly. It’s just unbelievable,” he told the Times.

The other victims were an infant, a child under 12 and the grandmother, who was in her 50s, authorities said.

The grandmother did not live with the family but had been babysitting, Dean said. He said he was unaware of any previous reports of domestic violence at the home.

David was a licensed security guard and held a permit to carry a gun but it expired in August 2020 and was listed as “cancelled,” according to records from the California Bureau of Security and Investigative Services, which regulates the private security industry.

What appeared to be David’s Facebook page includes a photograph of a crucifix and his posts from late October and earlier this month talk about spiritual and moral views.

“Just know that God loves you when you feel unloved for,” David said in a Nov. 16 post.

He posted on Nov. 14: “The devil wouldn’t be attacking you so hard if there wasn’t something valuable inside of you. Thieves don’t break into empty houses.”

The killings happened in a neighborhood of tidy, modern homes, some decorated for Christmas. Crime scene tape blocked access to the street where the victims were shot.

Investigators on Monday went in and out of the single-story gray home on the corner of the street. Neighbors watched coroner’s workers load the covered bodies of the victims into a truck.

The Beltrans said they would go outside in the afternoon in the summer to water their plants and would see the kids riding bicycles around the neighborhood with a dog. The children would say hello but not chat with the neighbors. Sometimes a woman — possibly their mother — would walk by with a stroller. 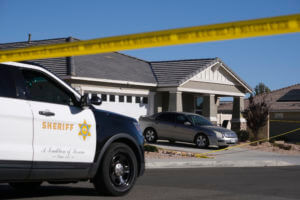 Los Angeles County Sheriff deputies guard a home in the city of Lancaster in the high desert Antelope Valley north of Los Angeles, Monday, Nov. 29, 2021. Authorities say four children and their grandmother have been found shot to death in a Southern California home and the children’s father was arrested on suspicion of killing them. (AP Photo/Ringo H.W. Chiu)

“They seemed to be like a happy family,” Grace Beltran said.

More than 12 hours later, Grace Beltran said she was still in shock.

“Nothing happens like that here,” she said. “It’s really traumatic.”

Gerard Beltran said he had only seen David once as he walked to his car.

Donnel Murray, who lives one street away, said he sometimes saw the grandmother outside while he rode his ATV in the neighborhood. He never saw her grandchildren. Murry said the woman would wave to him, recently asked him about his ATV and had mentioned a grandson.

James Martin, 32, who lives nearby, said the deaths broke his heart.

“I don’t understand it,” he said. “I know things get rough but it’s never worth it to take the life — lives — of anybody.”