MIAMI (WPTV) — A South Florida man pleaded guilty Wednesday after mailing $10,000 to a hired assassin in a botched attempt to have his ex-girlfriend’s new lover killed.

Ryan Hadeed, 43, of Pembroke Pines, was arrested and charged with using the mail to commit murder-for-hire in December. 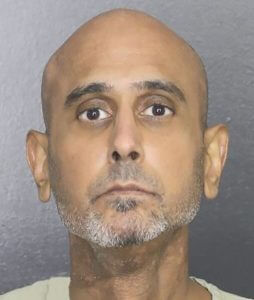 Federal prosecutors said Hadeed admitted that he mailed a letter to the would-be killer in September, writing, “I need someone eliminated. I’ve been told you can arrange that. $10,000 All in cash and upfront. Person located in Tampa.”

In that letter, and two later ones, Hadeed instructed the recipient to signal his acceptance of the offer by posting marked sheets of paper on a storefront window, among other things.

The assassin-for-hire received a final letter from Hadeed in November that included a description and pictures of the man whom Hadeed wanted dead, the intended target’s home address and likely travel schedule, as well as a deadline to carry out the hit. Also inside the envelope was $10,000 in cash.

Hadeed left the country on a one-way ticket the same day that the would-be killer received the cash and pictures.

“During a secondary customs inspection of Hadeed when he returned to the U.S. from his international trip, additional evidence of the crime was uncovered,” a news release from the U.S. Attorney’s Office for the Southern District of Florida said. “Law enforcement officers, who had learned of the crime, arrested Hadeed.”

This story was originally published July 27, 2022 by WPTV in West Palm Beach, an E.W. Scripps Company.