OKLAHOMA CITY (AP) — The Oklahoma marijuana farm where four people were killed and one was wounded was operating under an illegally obtained license to grow marijuana for medical purposes, an Oklahoma State Bureau of Narcotics spokesman said Friday.

The application for the license by Kevin Pham fraudulently stated that the operation was 75% owned by an Oklahoma resident, as required by state law, said bureau spokesperson Mark Woodward. The pot farm on a 10-acre property west of Hennessey, a town about 55 miles northwest of Oklahoma City, was the site of four execution-style killings in November that targeted three men and one woman, all Chinese citizens.

“Agents have interviewed the man who is listed as the 75% owner … that person has no knowledge of operations” at the farm, Woodward said.

“He just went to Pham’s office for payments” as the registered 75% owner, Woodward said.

Pham has been arrested on drug and weapons charges. Court documents do not list an attorney who could speak on his behalf.

Woodward did not disclose the amount of the payments to the man he described as a “ghost owner” and said the man has not been arrested, but could face fraud charges.

Woodward said the OBN is investigating whether the marijuana grown at the farm was illegally sold in other states.

“Our law says what is grown here has to be sold here” in Oklahoma, Woodward said, and can not be transported across state lines. 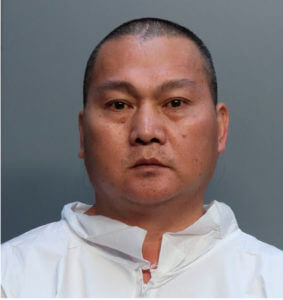 This photo provided by the Miami-Dade Corrections & Rehabilitation Department shows Wu Chen. Wu Chen, also known as Chen Wu wanted in the shooting deaths of four people and wounding of a fifth at an Oklahoma marijuana farm has been extradited back to the state from Florida, authorities said Friday, Dec. 2, 2022. (Miami-Dade Corrections & Rehabilitation Department via AP)

The names of the four people killed Nov. 20 have not been released. A suspect in the case has been extradited back to the state from Florida, where he was arrested Nov. 22 after the vehicle he was driving was flagged by a car tag reader, police in Miami Beach said.

Oklahoma State Bureau of Investigation officials and the Kingfisher County district attorney did not immediately return phone calls to The Associated Press on Friday and the county sheriff’s office referred questions to the OSBI.