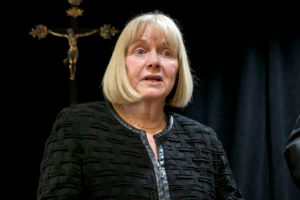 She’s already familiar with the job, having done the same thing three years ago after FBI raids on Michael Cohen, another one of Trump’s former personal attorneys.

Cohen eventually pleaded guilty to breaking campaign finance laws and other charges. He spent about a year of a three-year prison sentence behind bars before the spread of the coronavirus in the nation’s prisons led to his release to home detention.

Investigators are probing Giuliani’s interactions with Ukrainian figures to see if he violated a law governing lobbying on behalf of foreign countries or entities.

The Republican and former mayor of New York City has not been charged with a crime. He has said all of his activities in Ukraine were conducted on behalf of Trump. At the time, Giuliani was leading a campaign to press Ukraine for an investigation into Joe Biden and his son, Hunter, before Biden was elected president.

Trump’s efforts to press Ukraine for an investigation of the Bidens led the House to impeach Trump, though he was acquitted by the Senate. 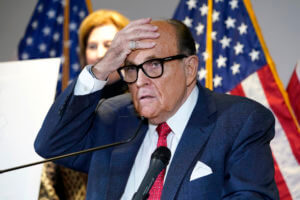 FILE – In this Nov. 19, 2020, file photo, former New York Mayor Rudy Giuliani, who was a lawyer for President Donald Trump, speaks during a news conference at the Republican National Committee headquarters in Washington. A law enforcement official tells the Associated Press that federal investigators have executed a search warrant at Rudy Giuliani’s Manhattan residence. The former New York City mayor has been under investigation for several years over his business dealings in Ukraine. (AP Photo/Jacquelyn Martin, File)

A cell phone has also been seized from Washington lawyer Victoria Toensing, a former federal prosecutor and ally of Giuliani and Trump. Her law firm has said she was told she was not a target of the investigation.

As part of a written order appointing Jones, Oetken directed the government to provide Jones with copies of materials seized from Giuliani and the search warrants that preceded the searches.

He also gave lawyers for Giuliani and the government a week to consult with Jones and create a schedule and timeline for concluding the privilege review, along with a process to resolve any disputes.

The appointment of Jones — who served as a Manhattan federal judge from 1995 to 2013 — comes after prosecutors and lawyers for Giuliani agreed that she was the right person to carry out the review.

Prosecutors say a similar review of materials in the Cohen raids took about four months.