FORT LAUDERDALE, Fla. (AP) — The jury that will decide whether Florida school shooter Nikolas Cruz gets a death sentence will tour the blood-stained, bullet-pocked building where he murdered 17 people four years ago, a judge has ruled.

Circuit Judge Elizabeth Scherer rejected a defense argument that a jury tour of the three-story building at Marjory Stoneman Douglas High School is not necessary because there are videos and photos of the crime scene and would only serve to inflame the jurors’ passions.

Cruz’s lawyers said the tour was particularly unnecessary since he pleaded guilty in October and the jury will not have to decide whether he committed the murders, only whether he is sentenced to death or life without parole. 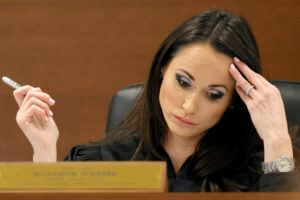 “The Court finds that a jury view of the crime scene remains useful and proper, even in light of the current posture of the case,” Scherer wrote in a ruling posted Monday. “The purpose of a jury view is to assist the jury in analyzing and applying the evidence presented at trial.”

Prosecutors want jurors need to see the path Cruz, 23, took through the building on Feb. 14, 2018, to understand the carnage he unleashed as he walked methodically floor-to-floor, firing his semi-automatic rifle as he went. Shortly after the shooting, the building was fenced off and sealed — the dried blood, Valentine’s Day gifts and bullet holes still in place.

The jurors will decide whether the aggravating factors of the killings — the multiple deaths, the planning, the cruelty — outweigh mitigating factors such as Cruz’s lifelong mental and emotional problems and the death of his parents.

Juries don’t typically tour crime scenes, but either side can request it if it believes a visit would help the members better understand the case. It is up to the judge to decide if they visit.

The building, which rises above the Stoneman Douglas campus, has been a grim, daily reminder of the shooting for students, staff and parents. The Broward County school district plans to demolish it after the trial.