WACO, Texas (AP) — A judge denied a request to suppress the confession of a woman accused of helping kill and dismember Spc. Vanessa Guillén, who was missing for about two months before her remains were found. 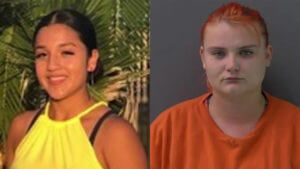 Lewis Berray Gainor, Aguilar’s defense lawyer, argued that police deliberately violated the law by waiting to give Aguilar her Miranda Rights until after she confessed on June 30, 2020.

Robinson killed himself July 1, the day Guillén’s remains were found near the Leon River in Bell County, officials said. The remains were identified as Guillén’s on July 6.

Two of the investigators who heard Aguilar’s confession initially took the stand at the hearing Wednesday.

A Texas Ranger and a Waco police officer on the federal task force investigating Guillén’s April 2020 disappearance detailed the conversation recorded in the interrogation room.

Assistant U.S. Attorney Mark Frazier played video clips of the confession to a rapt courtroom that shows Aguilar outline the gruesome details of Guillén’s slaying. She also helped officers by reaching out to Robinson, the suspected killer, via cell phone.