NEW YORK (AP) — A lawyer for Kevin Spacey sought Tuesday to poke holes in the story of another actor who claims Spacey made a sexual advance on him when he was a teenager.

During an aggressive cross-examination at a civil trial in Manhattan, defense attorney Jennifer Keller zeroed in on inconsistencies between Anthony Rapp’s account of how he first met Spacey in 1986 and that of an older friend who was there. 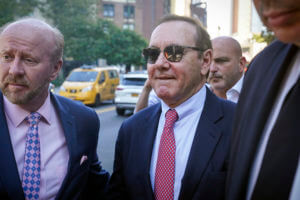 Actor Kevin Spacey leaves court following proceedings in a civil trial, Friday, Oct. 7, 2022, in New York, accusing him of sexually abusing a 14-year-old in the 1980s when he was 26. (AP Photo/Bebeto Matthews)

Rapp said he was 14 when Spacey invited him and the friend to a nightclub after meeting them backstage at a Broadway play starring Spacey. He testified they went home without incident immediately after the nightclub outing.

However, the friend — who was in his late teens at the time — has said in a deposition that the pair actually went to Spacey’s apartment and described Spacey trying to lure the friend into a sexual encounter.

Considering the friend’s deposition, “You knew you had a problem with your story, correct?” Keller asked.

“I don’t dispute his story. I just don’t remember it,” Rapp said.

According to Rapp, it was days later before he went to Spacey’s apartment for the first time for a party. He has testified that after the other guests left, Spacey forced himself on him by pinning him down on a bed — an allegation Spacey denies. 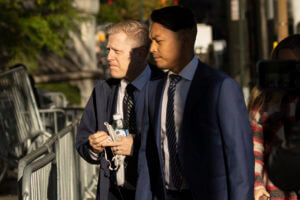 The cross-examination came during the second week of a trial stemming from the accusation Rapp first made publicly in 2017 before suing Spacey. It was among similar claims that largely shut down Spacey’s career with multiple allegations of inappropriate touching or sexual advances.

At the time, Spacey was starring in Netflix’s political thriller “House of Cards.” He’s also known for his role in the 1999 film “American Beauty,” which won him an Academy Award.

As a teenager, the 50-year-old Rapp acted in films including “Adventures in Babysitting.” He was later part of the original Broadway cast of “Rent,” and is now a regular on “Star Trek: Discovery” on television.

Under questioning by his own lawyer earlier Tuesday, Rapp recounted how he confided in a classmate after his encounter with Spacey. He said he told the friend that he watching TV in a bedroom when Spacey “came in drunk, picked me up as a groom does a bride, and he climbed on top of me trying to get with me sexually and I managed to squirm away.”

He also recalled that when he was still in high school, he once went to see a movie starring Spacey and realized how much he was traumatized. He said he felt like he’d been “stuck with a cattle prod. Like I jumped out of my seat. Adrenaline. Sweaty palms.”

In 1999, Rapp had a chance encounter with Spacey in a restroom at the Tony Awards, he testified.

“As I was washing my hands, Kevin Spacey walked through the door,” he said. “I looked at him and he looked at me. That was startling. … I wanted very much to get away.”

Rapp’s lawyer — responding to defense suggestions that Rapp was obsessed with Spacey — asked him, “Have you ever had a crush on Kevin Spacey?”