NEW ORLEANS (AP) — It was a tragically high price to pay for catching a suspected car thief: two innocent teenagers dead and a police officer jailed, facing serious charges for a car crash that resulted from the pursuit.

Maggie Dunn, 17, and Caroline Gill, 16, who were cheerleaders for their high school in the southern Louisiana town of Brusly, died in the collision Saturday. They’re the latest fatalities among hundreds every year attributed to accidents involving police pursuits. 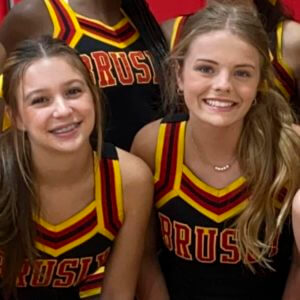 In this image provided by Janae Montgomery, Caroline Gill, left, and Maggie Dunn are shown in their cheerleading uniforms at Brusly High School in Brusly, Louisiana. Gill and Dunn were killed Saturday, Dec. 31, 2022, in a car crash. Authorities said a police officer from nearby Addis, La., crashed into the car the two girls were in after he joined a pursuit of a suspect that began in Baton Rouge. (Janae Montgomery via AP)

Many police departments have tightened their policies on such pursuits in recent years. However, National Highway Transportation Safety data show that 455 deaths were tied to police pursuits in 2020.

The Louisiana case is unusual in that the local prosecutor says the officer, 42-year-old David Cauthron, acted so recklessly that he should face charges and is preparing to ask a grand jury to consider bringing them.

Authorities say Cauthron, an officer in the town of Addis, joined a chase in rural West Baton Rouge Parish that started when police in Baton Rouge pursued a man suspected of stealing his father’s car.

Cauthron, authorities said, drove his police car through an intersection in Brusly, which is next to Addis, ignoring a red light and colliding with a car that held the two girls and Dunn’s 20-year-old brother, Liam, who was critically injured.

“In my experience, I have not seen a police officer charged criminally in a police pursuit case,” said Chicago civil rights attorney Andrew Stroth, who has handled numerous lawsuits in such cases but has no ties to the Louisiana collision.

Cauthron remained jailed Thursday, according to online records. Neither the jail nor the parish court clerk’s office listed an attorney for him.

Parish District Attorney Tony Clayton said in a news release this week that he intends to ask the grand jury to consider charging Cauthron. Possible charges include negligent homicide and negligent injury. Clayton stressed that the investigation will be thorough, but he made clear that he believes the hot pursuit of suspect Tyquel Zanders, 24, was a deadly mistake. 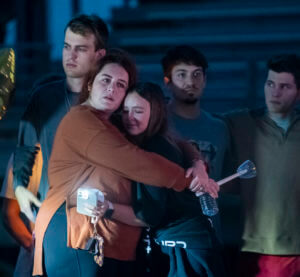 Family members of Maggie Dunn hug during the Candlelight vigil for Dunn and Caroline Gill on Monday, Jan. 2, 2023 in Brusly, La. A police officer has been charged over his role in the death of two teenagers during the high-speed pursuit of a home-invasion suspect in Louisiana. (Michael Johnson/The Advocate via AP)

“Sirens and police vehicles do not give an officer the authority to cut through a red light,” Clayton wrote, adding that evidence so far indicates Cauthron was “grossly negligent.”

Clayton didn’t limit his criticism to Cauthron. He previously publicly questioned whether police in Baton Rouge should have pursued Sanders, who was arrested, uninjured, following a chase that involved multiple law enforcement agencies on both sides of the Mississippi River.

Baton Rouge news outlets, citing arrest records, say Zanders is accused of entering a relative’s home on Saturday and making off with his father’s car before leading police on a chase across the river and into Brusly, where the crash occurred. Authorities say Zanders drove back across the river and was arrested in Baton Rouge, where he is charged with car theft, home invasion and aggravated flight.

The Baton Rouge Police Department has a pursuit policy that is posted on the city’s website and lays out when officers can an can’t give chase. A department spokesman, Sgt. L’Jean McKneely, said the pursuit that led to the two teens’ deaths is under review.

Addis police officials did not respond to a request for information about the policy.

Police pursuit deaths often get less attention than controversies over the police use of force, but criminal justice reformers are very aware of them. Policies governing pursuits in New Orleans were adopted after the city agreed to myriad reforms under a 2012 court settlement that followed numerous high-profile incidents involving deadly force. 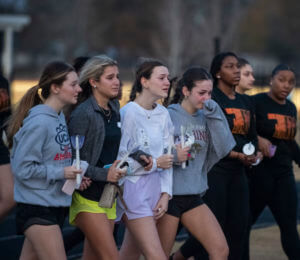 Students walk to the Brusly High School football field for the candlelight vigil for Maggie Dunn and Caroline Gill on Monday, Jan. 2, 2023 in Brusly, La. A police officer has been charged over his role in the death of two teenagers during the high-speed pursuit of a home-invasion suspect in Louisiana. (Michael Johnson/The Advocate via AP)

Michael Downing, a former deputy police chief in Los Angeles, said his department adopted stronger restrictions on pursuits because of deaths, injuries and lawsuits. Strong policies are needed to temper a police officer’s natural urge to pursue a criminal suspect, he said.

Policies differ from department to department, and the issues at play are complex, including whether a suspect poses an immediate threat, he said.

Despite the policies adopted across the country, pursuit-related deaths remain a problem, said Stroth.

“Officers driving willfully, wantonly at high rates of speed in densely populated communities where there’s no real threat,” Stroth said. “And the results have been tragic.”