SEBASTIAN, Fla. (WPTV) — Police said a Florida man confessed Tuesday to killing his 67-year-old fiancée and then driving her body to a Walmart parking lot.

Officers were called to the Walmart, located at 2001 US Highway 1 in Sebastian, at about 7:45 a.m. Witnesses reported that a woman was inside a parked vehicle and possibly dead. 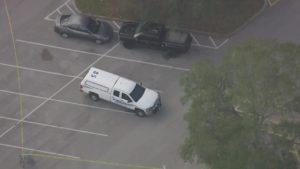 A black pickup truck that appeared to be the focus of a death investigation is surrounded by police tape in the parking lot of a Walmart, Oct. 5, 2021, in Sebastian, Fla. (WPTV)

Investigators said Bishop’s fiancé, Michael Despres, 56, was also at Walmart and gave confusing accounts of Bishop’s whereabouts before she was located in the parking lot.

After he was interviewed by detectives, police said Despres confessed to killing Bishop at their home and later transporting her to the parking lot of Walmart, where he left the body.

Police said the investigation is ongoing and evidence is being collected from the suspect’s residence, his workplace and both of their vehicles.

Witnesses told WPTV earlier in the day that they saw a body being loaded onto a stretcher. “About six people [were] looking at that truck. There was something in that truck, and we didn’t know if the person was dead or just lying in there, but they wouldn’t let us get very close,” said shopper Chuck Tranfhelia.

Police have not released a motive for the killing. Walmart remained open during the investigation.

This story was originally published October 5, 2021, by WPTV in West Palm Beach, an E.W. Scripps Company.