MINNEAPOLIS (AP) — A federal judge has sentenced a St. Paul man to more than eight years in prison for burning, looting and damaging businesses during a 2020 protest against police brutality in Minneapolis. 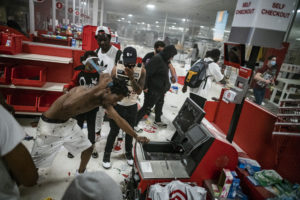 In this Wednesday, May 27, 2020 photo, a looter uses a claw hammer as he tries to break in to a cash register at a Target store in Minneapolis. Rioters ignited fires and looted stores all over the city, as peaceful protests turned increasingly violent in the aftermath of the death of George Floyd. (Richard Tsong-Taatarii/Star Tribune via AP)

U.S. District Judge Patrick Schlitz sentenced 32-year-old Victor Devon Edwards on Wednesday to 100 months in prison and two years of supervised. A jury convicted Edwards this past August of one count of riot and one count of arson.

According to prosecutors, Edwards drove to downtown Minneapolis on Aug. 26, 2020, to join a crowd that was protesting after false rumors surfaced that police had killed a man. Surveillance video shows the man shot himself but anger was still running high over George Floyd’s death three months earlier and the gathering descended into chaos. More than 130 people were arrested.

According to prosecutors, surveillance video shows Edwards looting a department store, helped fuel a fire inside Target’s headquarters building that caused nearly a $1 million in damage and entered other closed stores and businesses. He also took orders from friends for items to steal during the looting, they said.