THORNTON, Colo. (KMGH/AP) — A man killed his wife and then himself at a Kingdom Hall of Jehovah’s Witnesses in suburban Denver, Thornton police said Sunday.

A fire was reported at the hall around 9 a.m. before another caller told police that a man had shot a woman and then himself, authorities said. 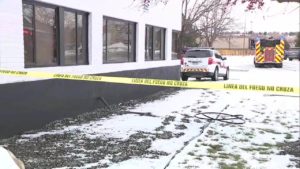 Officer J. Walker said investigators believe that the husband and wife arrived at the Kingdom Hall together. It’s not yet clear if this was a kidnapping situation or if the wife was there willingly, Walker said.

The husband shot his wife and then killed himself outside of the building, police said.

Walker said three “pipe bomb-like” devices were thrown through the building’s windows. It’s not clear if the suspected shooter, or somebody else, threw the devices inside.

Both were former members of the congregation, police said. They have not been publicly identified by the coroner’s office as of Monday afternoon.

Police added that they had found the “three incendiary devices” at the scene. They were rendered safe later in the day.

In the aftermath, the Sherrelwood Congregation of Jehovah’s Witnesses responded to the shootings, saying it was shocked and deeply saddened.

“Our hearts go out to the family and friends of those who have been traumatized by the heinous actions that took the life of an innocent victim and threatened the lives of many others,” the statement reads.”

The Associated Press and KMGH, an E.W. Scripps Company, contributed to this report.