DADE CITY, Fla. (Court TV) — A judge has sentenced Justyn Pennell to life in prison after he pleaded no contest to the murder of a Florida pedestrian.

Authorities say 21-year-old Pennell was driving his PT Cruiser on Jan. 9 when he saw the victim walking alone on the side of the road. He passed the victim, then made a U-turn and intentionally drove his car toward 75-year-old Michael Pratt, according to investigators. The victim was an Army veteran and grandfather.

In an interview with police, Pennell said that the victim’s body stayed on the hood of his car following impact. After the victim fell off the vehicle, Pennell said he realized his brakes were not working. He maneuvered onto a street then came to rest against a pole. The 911 call originated only because his vehicle stopped working so close to the scene. 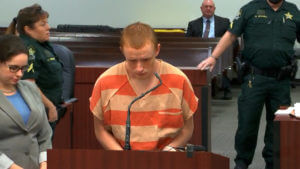 Justyn Pennell stands as a judge sentences him to life in prison for the murder of a pedestrian Wednesday, March 23, 2022, in Dade City, Florida. Pennell had pleaded no contest. (Court TV)

Pennell allegedly told authorities he planned to killed someone for months. He was charged with premeditated murder.

Two years and two months after the killing, Pennell changed his plea to no contest to the charge against him, just as potential jurors gathered for jury selection. Judge Mary Handsel questioned him on whether the decision was voluntary and done with a clear head.

In response to if he has any mental or emotional illnesses, Pennell told the court he’s been diagnosed with Asperger’s, depression, and PTSD. He said he’d been recommended medication but was not taking any while at the jail. Despite the reported condition, he agreed not being medicated did not prohibit him from making a sound plea.

First-degree homicide in Florida carries a mandatory sentence of life. There is no parole opportunity for murder in Florida.

Court TV learned a critical motion filed by the defense requesting that Pennell’s autism and Asperger’s diagnoses be admitted at trial was denied, prompting the decision to plead out.