MINNEAPOLIS (AP) — A man convicted of kidnapping a Wisconsin girl and killing her parents told police after his arrest that he never thought Jayme Closs would escape because she was petrified, and that after holding her captive for two weeks, he believed he’d get away with his crimes, according to a transcript of a police interview.

“I know that she was just (expletive) terrified of me,” Jake Patterson said following his arrest in January.

The transcript of Patterson’s interview with authorities was among hundreds of pages of investigative documents released Friday by the Wisconsin Department of Justice. The files include details about tips authorities received as they were searching for Jayme, as well as evidence collected after her escape. Some of the files are redacted.

Patterson, 22, is serving a life sentence after pleading guilty in March to two counts of intentional homicide and one count of kidnapping. He admitted he broke into Jayme’s home on Oct. 15, 2018, gunned down her parents, James and Denise Closs, dragged her away and held her under a bed in his remote cabin for 88 days before she made a daring escape. She was 13 at the time.

The transcript of Patterson’s interview paints a picture of a man who acted on impulse and controlled Jayme’s movements around the cabin where she was held. Patterson believed he had restrained Jayme with fear, telling police he never put extra locks on the doors or windows, because he thought she’d never leave.

“I just trusted her and that, she wouldn’t try to get out,” he said. 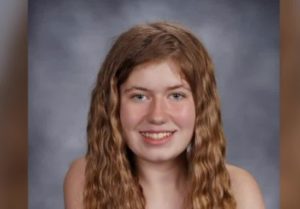 Patterson told police he initially threatened to kill Jayme if she made noise or moved. He said that once they arrived at his cabin, he burned her clothes and dressed her in his clothes, then laid her on the bed. He said she fell asleep, and he felt sick about what he had done and slept on the couch.

He said that he gave her food and water, but she wouldn’t eat at first. And, he said, she “learned quickly” that he would get angry over nothing, so she was nice to him so he wouldn’t hurt her. He said he initially thought he’d get caught, but as time went by, he believed he’d get away with it and didn’t feel as bad.

According to the transcript, he was counting on “mind things” to keep Jayme from running. He also forced her to be quiet when his father or others came over. “Like at first I would say that, you know you have it really good here, I’m treating you good, and she’d be like yeah okay. … I was like you could have it a lot worse here,” he said.

At one point, he said, he was drunk and feeling guilty so he let Jayme write a letter to her aunt, to let her family know she was alive. He said he planned to drop that letter off, but told police that it was still in the cabin when he was arrested.

Patterson said Jayme walked around with him in the yard at times, but never left the property. Authorities asked Patterson if he ever tried to change Jayme’s appearance, and he said he tried to cut her hair once, but she cried and said didn’t want him to, so he didn’t.

While Patterson took measures to conceal his identity when he broke into the Closs home, it was clear he didn’t think ahead to what he would do in the long term. He said he acted “pretty impulsive-ish” saying he thought he’d get a job, rent an apartment, and that he didn’t think about her leaving.

“I, I’m really good at just not thinking about stuff,” he said.

He also talked about the killings, saying that he was telling himself “it’s them or me,” and that he planned to shoot anyone in his way once he decided he wanted to take Jayme. He said  before he shot Denise Closs, he pointed the gun at her and “just shot it like right in the head. I didn’t even look when I did it. I looked away.”

One year after her abduction, Jayme released another statement, saying she is feeling stronger and getting back to activities she enjoys and hanging out with friends. Family attorney Christ Gramstrup said Jayme is “moving forward courageously and reclaiming her life. Her incredible spirit and strength continues to inspire everyone around her.”

The documents released Friday included a report by the Douglas County sheriff’s deputy who took Jayme to safety after she escaped. That deputy said that when they were riding in the squad car, she learned of Patterson’s arrest and told Jayme he was in custody.

“Jayme showed me a small smile and we continued,” the deputy wrote.