NORFOLK, Va. (WTKR) – From books to movies and streaming shows, true crime has been growing in popularity the past few years.

News 3 Investigates is shedding light on another growing trend that gets you closer to well-known criminals, and it’s getting mixed reactions. These are items tied to some of the most infamous names being sold on the open market, often referred to as “murderabilia.” 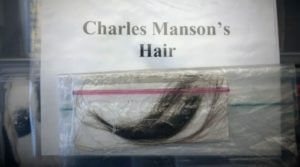 Andy Kahan, the Director of Victim Services with Crime Stoppers in Houston, Texas, has worked across the country for years to try and curb this industry.

“You shouldn’t be able to rob, rape, and murder, and then turn around and make a buck off of it,” Kahan told News 3.

Kahan said, in some cases, killers profit from this industry, and in other cases, anyone can cash in.

“You can’t imagine the pain and grief that it causes someone who lost a loved one to murder when they find out a third party is selling items from the person that took one of their loved one’s life for pure profit,” Kahan said. “It’s like being gutted all over again.”

According to Kahan, popular “murderabilia” items include letters, autographs, and artwork that can be found for sale online right now. However, Kahan added other items that go beyond canvas and paper.

“I’ve seen fingernail clippings sold… Charles Manson’s hair,” he said. “Right now, kind of the new thing is handprints where a serial killer will put their hand and they’ll trace it, and they’ll put it out for sale.”

News 3 asked Kahan how items like that make it out of prisons and onto websites.

“Most of the items are obtained by good old-fashioned U.S. mail,” Kahan said. “This was once an underground market, and of course with the internet, [that] made it very easy for buyers and sellers to get together.”

One of those sites is run by William Harder.

“I understand that people find this offensive, but this is America,” Harder said. “If you don’t like it, don’t buy it.”

For years, Harder has owned Murderauction.com.

“When Netflix comes out with something or some of the other streaming services, it’s good for me,” Harder said.

A collector himself, Harder runs the online auction site where people can buy and sell items.

“Visitors, it depends… when news stories come out, we’ll get thousands every hour,” Harder said.

News 3 asked Harder what inspired him to start the website.

“As I got older, the interest in crime and that segment of society, it began to captivate me,” he said. “Like a guy who goes around collecting baseball cards.”

“Anything captivated or put on the television and sent out to the masses, is going to create an interest in the percentage of the public that sees it,” Harder said. “Some people are like look, I want to have something, and there’s no rhyme or reason to it.”

“I often use the example of stamps,” Harder added. “People who collect stamps aren’t in love with the post office. They’re not obsessed with mail. It’s just what they like to collect.”

News 3 also asked Harder what he would say to those who believe this industry is wrong and insensitive, especially to victims.

“We’re a capitalist-based society,” Harder responded. “If you’re a victim’s family member, please don’t come to my website. This isn’t for you.”

“The notion of banning people from collecting, or selling their personal property, it just seems like a real slippery slope,” Harder added.

News 3 Investigates did some digging on Harder’s site and other sites selling “murderabilia,” and found items linked to John Allen Muhammad and Lee Boyd Malvo.

Both Malvo and Muhammad are the convicted killers in the 2002 D.C. Sniper Attacks.

“There was true fear running through the area,” police officer Tim Meacham said.

Meacham was a police officer in Ashland, Virginia in October 2002, when he responded to a shooting in the city.

It was one of several incidents involving Malvo and Muhammad that year that left many injured or killed in Virginia, D.C., and Maryland.

“During that time, and working in that area, I was asked to pump people’s gas because they were afraid to get out of the car,” Meacham told News 3. “Some gas stations had brought up tarps so you couldn’t see who was at a gas pump from the road.”

Meacham eventually testified at both Malvo’s and Muhammad’s trials in Hampton Roads.

“I was very angry,” Meacham said recalling the feelings he felt towards both men during their trials.

In 2009, Muhammad was executed in Virginia.

But their case has lived on through sites like Harder’s. News 3 found Malvo’s Virginia Department of Corrections ID badge for sale for $375.

The seller saying quote, “Great ID card from a high-profile case with provenance.”

News 3 showed Meacham a copy of the listing.

“That, to me, just doesn’t make sense,” Meacham said. “You’re making the murderer famous, when the murderer should be infamous.”

For Meacham, he has many questions about the listing.

“How did it get out? How did somebody come in possession of it to sell it,” he asked.

News 3 took those questions to Harder.

“I don’t know how the Malvo ID originated,” Harder explained. “I never spoke to the seller as to how he obtained it.

According to Kahan, prison-issued IDs are rare gets.

“For the most part, prison officials have no idea this is going on behind their back,” Kahan said.

News 3 reached out to the Virginia Dept. of Corrections about Malvo’s ID card showing up on an online auction site.

In a statement, Carla Lemons, a spokesperson for the department, said, “The Virginia Dept. of Corrections does not condone it, and we’re investigating how it got released.”

Kahan said he has worked to try and get a federal law passed to ban “murderabilia,” but it was unsuccessful.

These laws, named after the 1970s serial killer from New York, ban criminals from being able to profit from their stories through writings, film, or TV shows.

However, Dr. Claville said courts have frequently struck down these laws on first amendment grounds.

This story was originally published Jan. 5, 2023, by WTKR in Norfolk, VA, an E.W. Scripps Company.