NEW YORK (AP) — New York’s attorney general has asked a judge to bar Donald Trump’s company from selling or transferring assets without court approval, saying it had engaged in a devious attempt to duck potential penalties in her fraud lawsuit against the former president.

In court papers filed Thursday, lawyers for Attorney General Letitia James said that shortly before she filed the lawsuit against the Republican in September, Trump incorporated a new entity in Delaware named Trump Organization LLC — almost identical to the original company’s name. 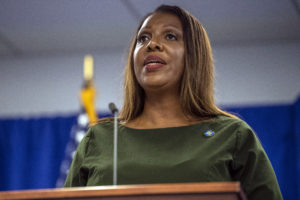 FILE – New York Attorney General Letitia James speaks during a press conference on Sept. 21, 2022, in New York. James has asked a judge Thursday, Oct. 13, to bar the Trump Organization from selling or transferring assets without court approval while a legal battle plays out over her fraud allegations against the former president’s company. (AP Photo/Brittainy Newman, File)

On the day the lawsuit became public, the company also registered a new entity in New York called the “Trump Organization II LLC.”

“Beyond just the continuation of its prior fraud, the Trump Organization now appears to be taking steps to restructure its business to avoid existing responsibilities under New York law,” lawyers for James wrote in their court filing Thursday.

The Democrat asked the court to appoint an independent monitor to oversee the company’s activities.

“We have repeatedly provided assurance, in writing, that the Trump Organization has no intention of doing anything improper,” Habba said. “This is simply another stunt which Ms. James hopes will aid her failing political campaign.”

James is running for re-election as attorney general against a little-known Republican attorney from Queens, Michael Henry. 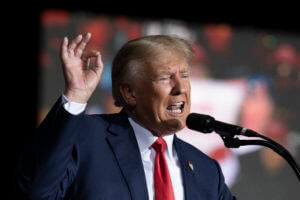 FILE – Former President Donald Trump speaks at the Minden Tahoe Airport in Minden, Nev., on Oct. 8, 2022. New York’s attorney general has asked a judge Thursday, Oct. 13, to bar the Trump Organization from selling or transferring assets without court approval while a legal battle plays out over her fraud allegations against the former president’s company. (AP Photo/José Luis Villegas, Pool, File)

In a lawsuit filed last month, James’ office accused Trump of habitually misleading banks and others about how much assets like his golf courses and other real estate were worth. In the latest filing, James said the organization continued to use improper methods of creating valuations.

The lawsuit is currently before Manhattan Judge Arthur Engoron, who has repeatedly ruled against the former president in related subpoena disputes. Trump’s attorney has asked that the case be transferred to the court’s Commercial Division, which is set up to handle complex corporate litigation.

In her motion for a preliminary injunction, James’ office said it had raised concerns with the Trump legal team about assets being moved out of state and asked for assurances that there would be no changes or that it would get reasonable notice if there were going to be some.

Trump’s lawyers “did offer to provide assurances and advance notice,” the attorney general’s office said, but “no concrete mechanism to either effectuate or enforce that offer.”

The attorney general’s office also asked that the court allow Donald Trump and Eric Trump to be served electronically. In the press release announcing the filing, her office said they had refused to accept being served with the complaints since the lawsuit was filed in September.