DENVER (KMGH) – A former delivery driver and registered sex offender was arrested in Fort Collins last week, but police say there may be other victims.

Cyrus Warren, 21, was arrested on Feb. 23 and booked into the Larimer County Jail on a $100,000 cash/surety bond after “repeated and inappropriate” interactions with children dating back to early December of last year. 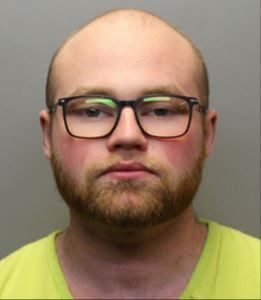 Fort Collins Police Services began their investigation into Warren on Feb. 7, when a Domino’s Pizza store manager called police to report a complaint from a customer about the suspect.

An initial investigation revealed Warren delivered pizza to the customer’s home at the Village Garden Apartments on two occasions – Dec. 6 and Dec. 22 – with the orders being received by the family’s two younger daughters.

During the Dec. 22 interaction, Warren allegedly asked a young girl if her parents were home and asked for a hug and picked her up. He then allegedly gave the child a note with his contact information and babysitting services.

Investigators said Warren then returned to the home on Feb. 7 in plain clothes (not wearing his uniform) and asked the same girl if her parents were home and if he could come inside to use the bathroom. The girl refused and closed the door before locking it so he couldn’t get in. Warren then allegedly knocked on the door several more times and reportedly tried to enter the home.

Police said the family contacted Domino’s about his behavior and found out he was no longer employed there as he’d quit months earlier.

Prior to his arrest, police also investigated an incident involving Warren on Dec. 23 of last year. During that incident, police said an acquaintance of Warren had asked her to hang out. The woman reportedly agreed, but instead of driving to where they were supposed to be going, Warren drove them to a secluded area and sexually assaulted her, police said. The woman was able to escape and called police.

Following these incidents, police issued a warrant of out Warren’s arrest on charges of stalking, attempted first-degree trespass, and sexual assault – all felonies.

Through their investigation, detectives learned Warren began working as a Domino’s Pizza driver on Oct. 31, 2021, and quit without notice on Dec. 23, 2021. Prior to this, he also worked in food delivery and advertised babysitting services as well, according to police.

“This suspect has shown a disturbing pattern of behavior, and we won’t stop until every victim has the opportunity to seek justice,” said Fort Collins Police Services Assistant Chief Tim Doran, who leads the Criminal Investigation Division. “I am extremely grateful for the proactive and ongoing support of the Domino’s staff. Even though Warren no longer worked for them, they immediately reported the customer’s concerns to law enforcement and have continued working with us to ensure the safety of our community.”

Due to these incidents, a work history that gave him access to homes, and Warren’s status as a registered sexual offender, police said they are concerned that there may be additional victims who have yet to come forward.

Anyone with information about these cases or other unreported incidents involving Warren should contact Detective Julia Chenoweth at (970) 416-2645. People who wish to remain anonymous may contact Crime Stoppers of Larimer County at (970) 221-6868 or www.stopcriminals.org.

This story was originally published March 2, 2022, by KMGH in Denver, an E.W. Scripps Company.